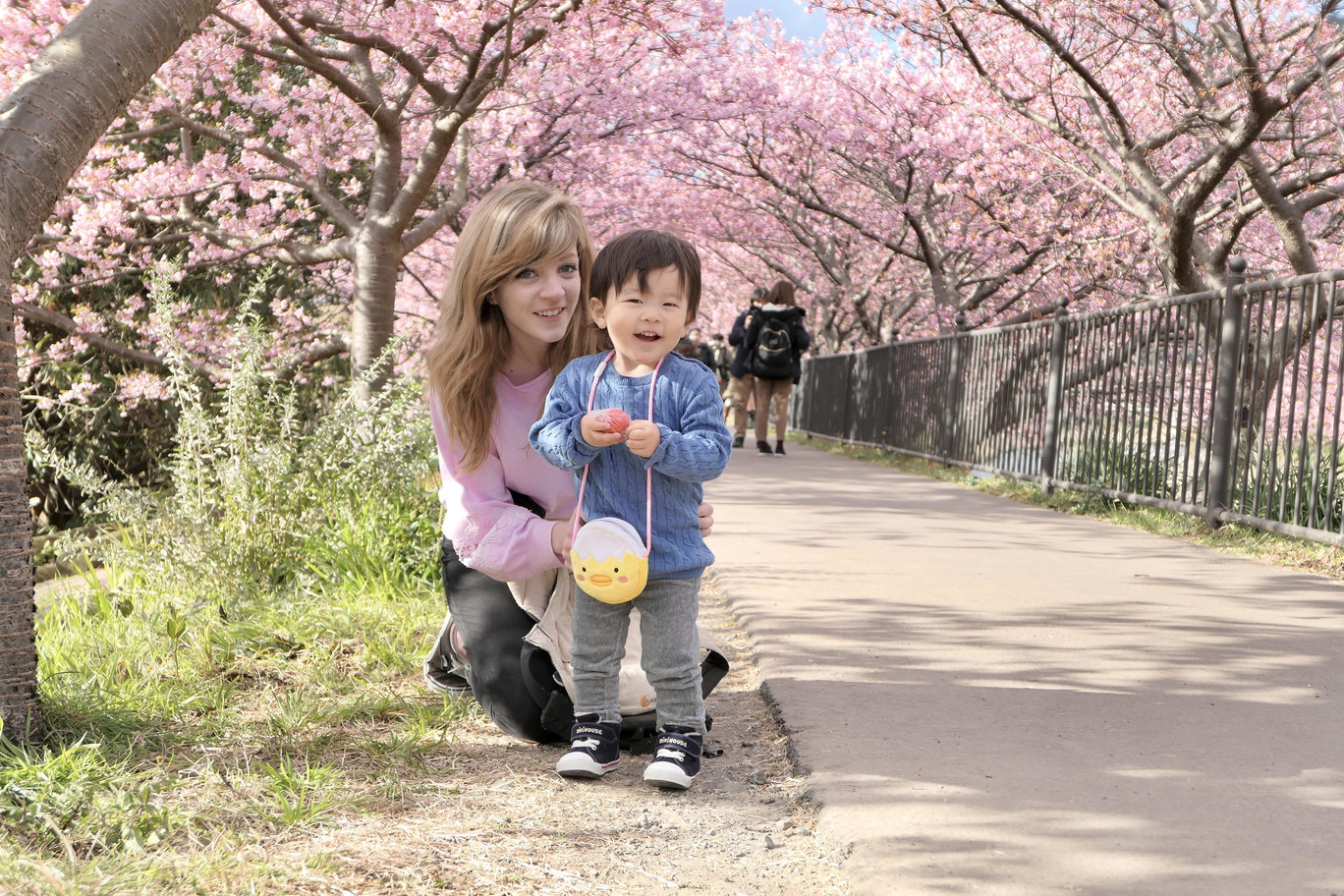 For many, the world of YouTube and Vloggers may be still quite foreign to them but for Lian McGillycuddy this is part of her livelihood. This brilliant Irish YouTuber whose channel is Fuji Family/バイリンガルファミリー , is one of the millions carving their way on the video platform. But with Lian, she’s quite unique in that she vlogs bilingually with her son and her husband in Japanese and English. This is her story.

Lian was born near Dún Laoghaire in Dublin. She grew up with two younger brothers and had always a massive love of reading thanks to her mum. In fact, she devoured books, particularly fantasy novels like Philip Pullman’s ‘His Dark Materials’ series and ‘The Lord of the Rings’.

When Lian was 11-years-old, her mum picked up a book ‘Across the Nightingale Floor’ by an author called Lian Hearn. It stood out to her as they both shared the same first name.

It is the first of a trilogy of fantasy novels (Tales of the Otori) set in a place with similarities to feudal Japan and these were the novels that sparked her interest in the country.

‘I was hooked on the books’ she tells me.  ‘From there I discovered Lafcadio Hearn who had an Irish father and Greek mother. He lived and worked in Japan translating Japanese ghost stories to English and writing books describing the then mysterious Japan to the foreign reader.’

Lian also indulged in Japanese movies like Spirited Away and My Neighbour Totoro from the likes of Hayao Miyazaki. These had a lasting impression on her and so she made Japan a country she simply had to visit someday.

The budding explorer went on to study neuroscience in UCD and though she really enjoyed it, she felt that her real strength was in languages.

‘You could often catch me trying to learn some Japanese or Spanish while I should have been studying!’ she jokes.

In her 4th year of college, Lian decided to do the Japan Exchange and Teaching (JET) Programme which brings people to Japan and teach English, predominantly in rural areas. She went straight there after graduating.

‘I had a wonderful experience on the JET Programme and would recommend it to anyone with an interest in Japan and teaching,’ Lian says. ‘I had done an elective module in UCD which taught some Japanese language and culture, so I had a bit of knowledge before I left.’

Lian was placed in the Shizuoka Prefecture in central Japan which was one of her choices on the application form.

‘I chose Shizuoka as I imagined it was similar to Ireland in some ways, lots of green countrysides, sea and a more laid-back atmosphere than the chaos of a big city,’ she tells me. ‘Shizuoka also has a bullet train so there would be easy access to Tokyo and Kyoto when I wanted to travel.’

She was placed in an academic high school which had a special focus on science. As she didn’t have teaching experience, Lian learned on the job but leapt headfirst into learning all about Japan’s culture and language. This experience forced Lian to be more outgoing which she says wasn’t what she was like before. She spent two years on the programme.

Lian met her husband at a Halloween party in Shizuoka, a week after they headed for dinner with a group of friends and then arranged to go to a football match together. Lian initially hadn’t planned on staying in Japan but everything seemed to fall into place.

‘I met his family after we had been dating for a while and it was lovely. Luckily, I could speak some Japanese at that stage so there was no language barrier!’ she muses.

‘When we got married, his parents and brothers got passports just to come to Ireland for our wedding! They flew from Tokyo to Dublin which took about 20 hours total, drove to Wexford for the wedding and had to go back to Japan the next day.’

‘Of course, it was an Irish wedding, so they were up dancing until 4am! They said they had never been to such a long wedding but had so much fun! Both of our families tried to speak each other’s language, and it was a really lovely time’.

Before settling in Shizuoka Lian had many sleepless nights thinking about where they would settle down. She had always been a home bird and her dad was so convinced that she would change her mind at the airport that he waited there after she had left.

At the moment Lian tells me that because of her husband’s job it makes sense for them to both be in Japan with her baby boy Seán as she’s happy to keep on teaching English abroad.

‘If we went to Ireland, I think we would have a hard time; firstly, finding somewhere to live and work visa issues for him’ she says. Despite being in Japan with her husband and son, Lian admits that she does get homesick at times especially around Christmastime.

‘The best time to be home for me is Christmas, there’s nowhere like Ireland at Christmas time! That has rubbed off on my husband. He loves the festive atmosphere and homey feeling of Christmas as much as I do. No country is perfect. But Japan is a great place to live, and we are happy here for the moment.’

‘I do want Seán to experience life in Ireland too, and have some of the same childhood experiences I did. If we could spend some time in Ireland in the future it would make me so happy.’

Before Seán was born Lian decided that she would rather give birth in Ireland. For her, it was a more familiar environment where she could also have the emotional support of her own family.

‘Luckily, my husband’s company allowed him to take paternity leave, so we were able to stay in Ireland for a while after Seán was born,’ she tells me. It was during this time that she began watching more and more YouTube.

‘When we had downtime when Seán was asleep – actually we had to hold him for most of the night until he was 3 months old as he had reflux issues – we watched YouTube! We thought that if we were going to raise Seán in Japan, what kind of things could we do to help him become bilingual? What were other international couples like us doing? So, we watched other families’ videos, some we loved that had a home-video feel and were uplifting to watch.’

The pair have been documenting their journey as a family with Seán since and have gathered more than 13,000 subscribers on YouTube.

Initially, the couple started filming their son so that they could keep the family updated back at home. As their popularity climbed, they thought that if their videos made someone smile, gave them a look into life in Japan or an insight raising a bilingual child, then that was fine with them.

‘I always thought the name Seán has a lovely sound to it, and my dad’s name is John, Seán as Gaeilge. I couldn’t imagine him having any other name now! He is Seánie!’

Lian and her husband had researched many different methods for raising a bilingual child and settled on the one parent, one language approach. Lian speaks English with Seán and her husband speaks Japanese to him.

‘Sometimes it is difficult as we live in Japan; I have to use Japanese with the in-laws and in daily life, so at home, we try to have English as the main language. I teach English lessons at home so Seán is exposed to lots of songs and games in English. ‘

‘At the moment I think his English understanding is a little better as he is with me most of the day. But he is saying lots of words in both languages already! I think he chooses the easier word to say, some Japanese like “Atta!” (I found it), and some English like “Let’s go!” and “What’s that?”’

On being a mixed-race couple, Lian says that people sometimes look at them, but the Japanese people culturally don’t stare much anyway.

‘People who are interested might strike up a conversation with us, like ask me where I’m from or if my husband can speak English,’ she says. ‘Now that we have Seán, people with kids will chat with us sometimes which is lovely. My husband was a little surprised the first time he came to Ireland that no one really batted an eyelid at him being a “foreigner”; in Japan, particularly the countryside, foreigners are a relatively rare sight!’

Lian tells me that their favourite video to record was Seán’s summer visit to his Great-Granny’s home (see above). She also loved filming the St. Patrick’s Festival which is their most-watched video.

Now that Seán is a toddler, Lian and her husband are looking forward to taking him to some places he will really enjoy while discovering new parts of Japan. They would love to meet other families like them even have plans to make a trip back to Ireland. Go n-éirí go geal leo!