From Clare to Greenland: How geese sparked this Irishman’s solo hiking adventures 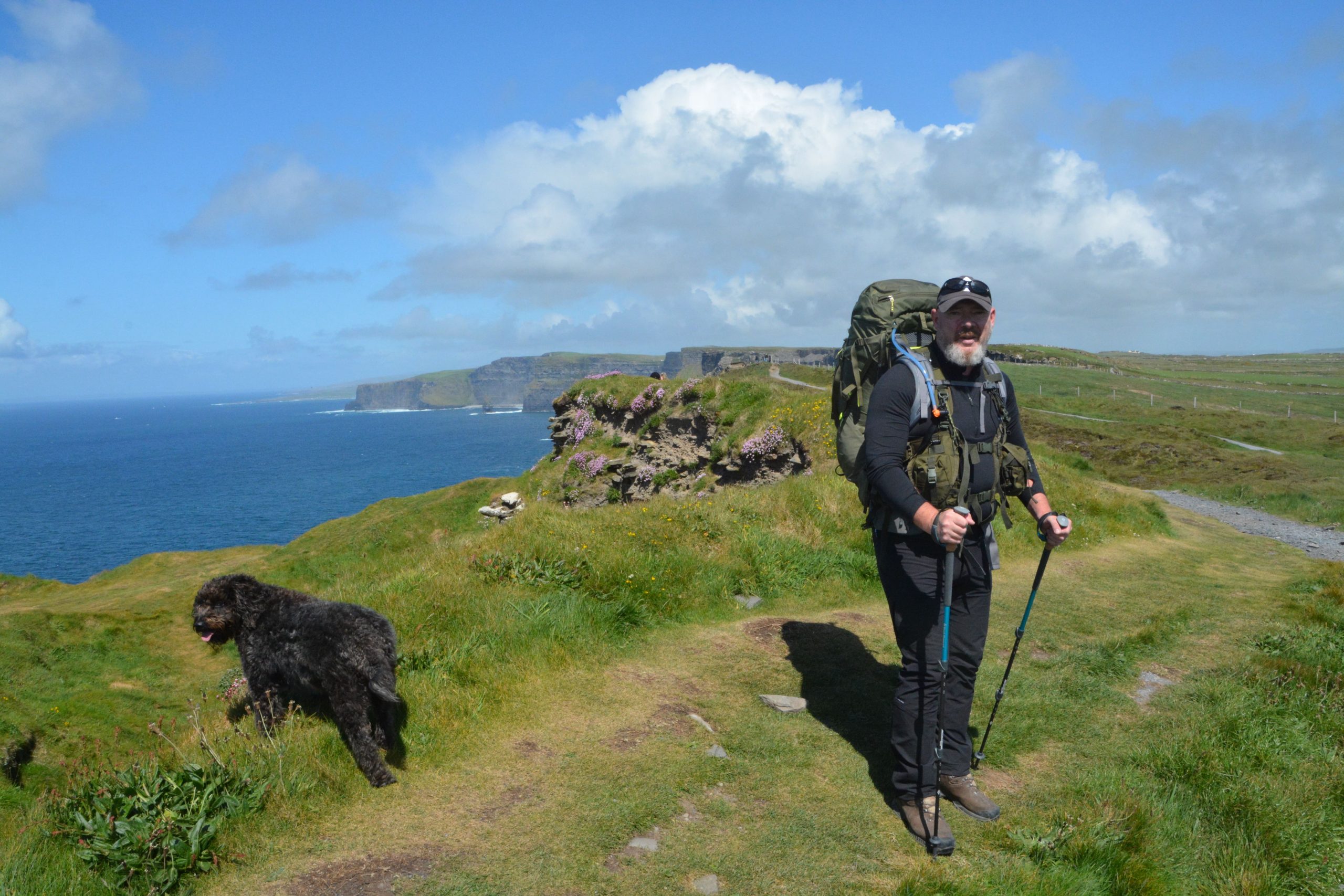 Dermot Cosgrove was born in Ennis and has been living in Kilkee for the past 20 years. He loves the outdoors. But there was a time when he was looking for a big change in his life and solo hiking wasn’t on his radar.

When he was 19, Dermot decided to enlist in the French Foreign Legion, a military branch of the French Army. After finishing basic training, he completed operational deployments in Africa and the First Gulf War. Following that he transferred to Djibouti in East Africa where he trained as a medic.

This diverse background led him to finally work as a security consultant with companies throughout Africa, the Middle East and South Asia including conflict zones like Iraq and Afghanistan. But it wasn’t in this career that his real passion lay.

‘I’ve always been in the outdoors and I grew up learning how to hunt and fish,’ he tells me, ‘but I was also very interested in everything that had to do with the natural world.’ Dermot was a budding photographer in his early teens and even while he was in the Legion he would often be seen wildlife watching.

Despite these moments of wildlife respite, the high intensity of the work that Dermot did added a lot of stress over the years and he battled bouts of depression. Dermot knew he needed a change. The wild and solo hiking was calling him.

‘Getting out into the wild was always something that I found therapeutic and relaxing,’ he says.

Dermot describes remote hiking as his ‘mid-life’ crisis. But in 2016, he had a chance conversation about geese which arguably changed his life. A Twitter acquaintance with whom he had been chatting to for a while was talking about Greenland’s White-fronted Geese and about hiking in Greenland.

‘I was rapidly approaching 50 and decided that I was going to go for it!’ he tells me. ‘I’ve always tried to challenge myself and I wanted to see if I was capable of doing the hike and being self-sufficient for 8 days in the wilderness.’

Dermot is refreshing in his honesty sharing that he ‘was in a very controlling and toxic relationship’. He thus saw journeying to Greenland and hiking as being the first steps in literally walking away from it all.

‘It was very much a life-changing experience for me and why I have a map of the trail tattooed on my arm!’ he muses.

‘I spent pretty much a year pouring over Google Earth tracing out the trail there along with any other mapping I could find online. Huw Thomas, who was my contact from Twitter, wrote me long descriptive emails which in a way were better than the guide book to the trail. He’s hiked it or a variant of it about 14 times now and is back up there this March to do it in winter conditions.’

To prepare physically for the journey Dermot increased both the weights he planned to carry and distances he planned to travel in places like the Burren in Co. Clare.

‘We don’t have a huge amount of off-road trail in Ireland unfortunately mainly due to the laws of access to property so it can be hard to find something that would mirror the conditions,’ he says. But never-the-less he persevered.

Dermot chose to do the route in reverse starting from Sisimiut as it just made sense to him to head towards the airport he’d be leaving from.

‘I spent the night in Sisimiut so I could fix my bag as I had my camera and other bits in it but I was absolutely bricking it before leaving,’ he admits.

The hike was expected to take between 8 – 10 days. Not only would it be challenging physically due to the terrain but there´s nothing but a few hunters and hikers huts between Sisimiut and Kangerlussauq. With that in mind, Dermot had to make sure that he carried 8 to 10 days worth of food as well as a sleeping kit.

He had about 26kg on his back and even though he had trained with that weight the terrain made the difference especially when it came to river crossings, going uphill or crossing bogs. It was far from straightforward.

Dermot chose to raise funds for the Irish Dogs for the Disabled on his solo journey because his sister has been involved with them on and off for about 17 years. He knew a little about their work but has subsequently gone on to learn a lot about them.

Irish Dogs for the Disabled are the only charity that provides assistance dogs 100% free of charge to people who 9 out of 10 are children and they have the only specialised stability dogs outside of mainland Europe. Recently they’ve begun training therapy dogs and they have also provided Ireland´s first dog to work with children giving testimony in court cases. Raising funds for them was essential to Dermot as he is a dog lover himself.

It was from his adventures in Greenland that he learned to be more judicious in his packing. ‘There was stuff I’d have left out and I’d have set myself a more relaxed pace’ he says. ‘I set myself a far too tight timetable as I was under pressure to come home.’ But it was a glorious experience none the less.

Though Dermot is not a religious person he says that being alone out in the wilderness is probably the closest thing to a religious experience for him.

‘It’s extremely calming. Despite the physical aches and pains, I come off the trail feeling like mentally the reset button has been pushed. Post trail blues tend to hit a couple of weeks after you finish and you just want to get back out again.’

This is often the same description found from those who’ve experienced the delights of walking the Camino de Santiago. At least that’s the case that I found when I walked with my Mom. There’s a sort of calming pull there to keep walking and pushing forward that you can’t quite explain.

Dermot’s ultimate goal would be to lead guided walks and bird watching excursions, first in Ireland along the Wild Atlantic Way but eventually France, Sri Lanka and Greenland. The great thing he says about remote hiking is that you can have very intimate wildlife encounters as the birds and animals are unused to seeing people. He describes seeing them up close and undisturbed as an amazing feeling.

This year the solo hiker plans to walk across Iceland in June 2020 while raising funds for Irish Dogs for the Disabled. He had previously tried to do this hike in 2019 but after four days was forced to retire due to damaged feet. But not one to give up, he was determined to try it again as soon as possible.

‘I´ll be landing there on June 5th to make my way north to my starting point at Raufarhofn. I begin walking south until I reach the town of Vik. It involves crossing some of the best bird-watching areas in Europe. Then [I walk] across the Odadahraun Desert and the Icelandic Highlands until I reach the southernmost point on the island.’

To date, the Clare adventurer has raised over €18,000 for charity through his wilderness hikes which may seem like a lot of money, but what few people know is that it costs €15,000 to train an assistance dog.

‘Now that that has been achieved I’ve reset the target to €30,000 and have a few more trips in the pipeline including a loose plan to paddle and walk the Shannon from source to sea and head to the Arctic next winter for a long-distance ski trip with a friend who mentored me for hiking in Greenland.’

Dermot has had a number of people tell him how having an assistance dog has changed their lives and the lives of the whole family. The dogs have given them some quality of life and hearing that spurs the solo hiker to keep going.

‘One of the stories that really hit me was a video of a 6-year-old who couldn’t wait to get a dog so he could throw away his wheelchair’ he tells me. ‘It’s stuff like that really sustains you when you’re having a bad day.’

Despite all his travelling abroad, Dermot has a lot of love for our hiking spots here at home in Ireland.

‘My favourite place to hike in Ireland would be in the Burren,’ he tells me. ‘It’s on my doorstep pretty much and on a good day looking out from above Blackhead across Galway Bay to the Bens in Connemara is amazing.’

And his favourite place abroad? ‘West Greenland, it’s wild and rugged and while physically testing is a magnificently beautiful place.’

Dermot stresses that solo hiking is very different from group hiking and that if one was to embark on this journey then they would need to train both physically and mentally.

His biggest tips are to learn how to be totally self-reliant and to really plan your trip by seeking advice from those who have already been to the area – in fact, Dermot plans his trips almost a year in advance.

Essentials for him are a satellite tracking beacon and a good first aid kit. He remarks that his medical training in the Legion continues to be invaluable. He has found that the community on both Twitter and Instagram have been incredibly supportive when passing on their knowledge.

His final words of advice: ‘never let anyone tell you that you can’t do it or knock what you are doing.’

You can find out more about Dermot on his website here and donate to his fundraiser here.