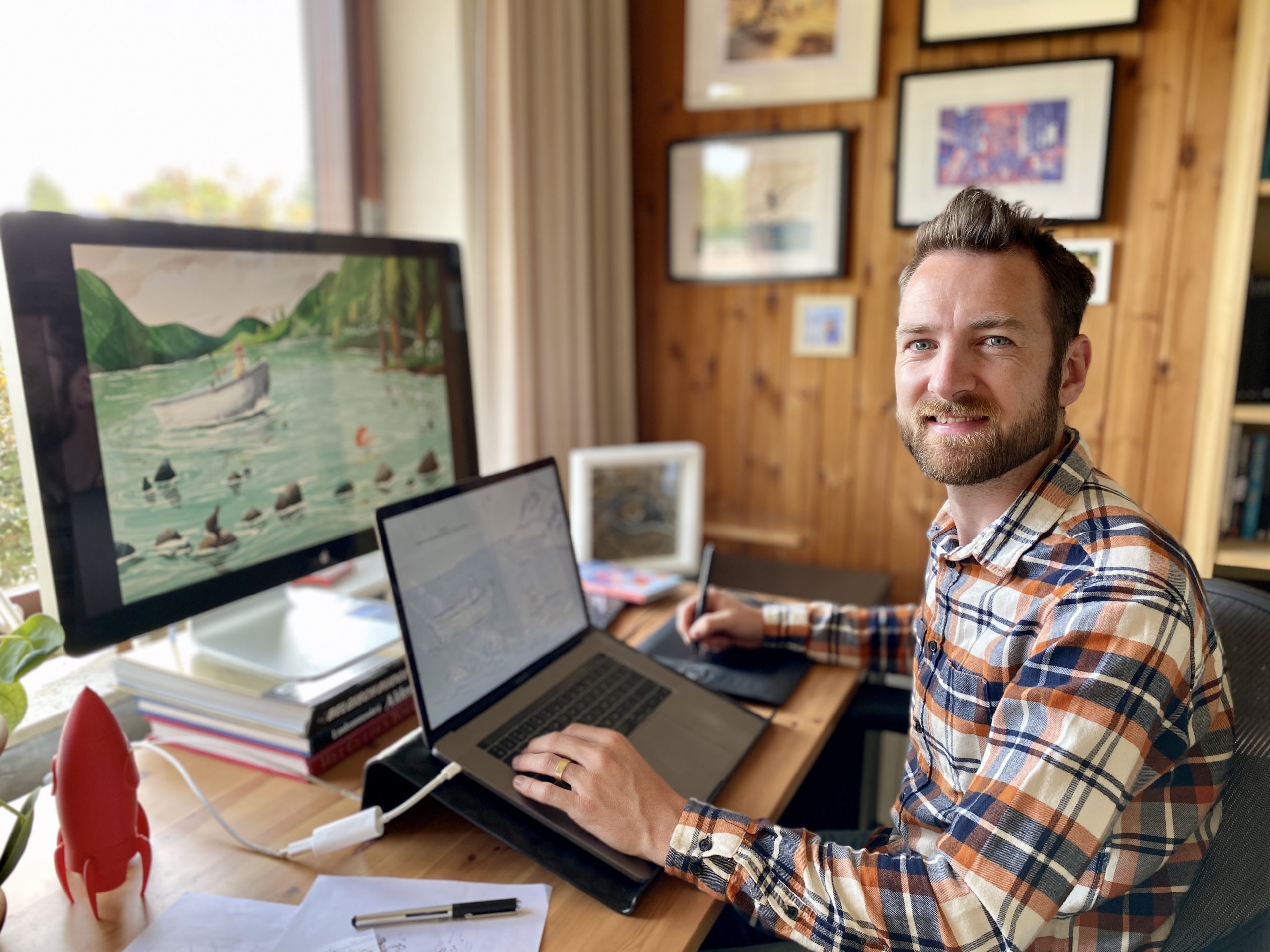 If there’s one thing that we’re not short of in Ireland, it’s creativity. And that’s exactly what Irishman Paddy Donnelly has showcased through his breathtaking Irish language illustrations and captivating drawings.

But Paddy’s journey begins in Ballycastle on the North Antrim coast where storytelling was a huge part of his life. Like many of us, Paddy was brought up with our epic myths and legends from a young age something which had a great influence on his work.

He was taken by the rough seas, rugged coastlines, islands and mountains of County Antrim and captured it all through illustration.

“That definitely comes from growing up in Ballycastle. The scenery there is absolutely stunning, and something I’ve come to appreciate so much more after moving away,” Paddy tells me.

Drawing was something that Paddy always loved as a child and even though he parted ways with it while in his teens and university, he found himself drawn back to the skill in his working life.

“Picking it up again has been so much fun, and there are definitely things I enjoy drawing now that I remember loving to draw as a child. Animals, especially birds, foxes, rabbits, made up maps and islands, dinosaurs. And now all these years later I get to do this for a living!” he muses.

But let’s backtrack a bit more.

Paddy studied Interactive Multimedia Design at University in Belfast, followed by a Masters in Multi-Disciplinary Design. The Irishman now lives in Belgium with his wife who he met while she was on Erasmus.

When Paddy moved abroad he started working for a web design agency where he forged a career in UX design on websites, apps and games. But the more he did that the more he realised that he preferred illustration work.

“Eventually in 2012 I left the company to go freelance, splitting my time between UX design and illustration projects,” he tells me. And it was then when working on kids apps that he found his rhythm.

“Designing for kids had unique challenges to it and was a perfect mix of illustration and design for me,” he says. “Illustrating picture books wasn’t really something I had seriously considered before, but I started to look into
more and more”.

“I’ve been focusing on illustrating for picture books now for over three
years, and I’m loving it!” he tells me.

Paddy has had five picture books published so far, and has worked on a number of book covers too. His sixth picture book, Here Be Dragons, will be published on the February 2nd, 2021 and is written by Susannah Lloyd.

“What’s particularly fun about this one is that there are so many small details and clues to spot the dragon in the illustrations,” Paddy explains.

“While the main character is quite oblivious to everything going on around him, kids will be able to spot what’s going on. I love books like that where the reader feels she’s two steps ahead of the characters”.

How did Paddy get into Irish language illustrations?

Paddy’s agent showed his work to Futa Fata, Irish language book publishers, who came back with a project that they felt he was suitable for “Scúnc agus Smúirín”.

“This was one of the first-ever picture books I worked on, and it was a joy!” Paddy says.

“It was such a pleasure working with Futa Fata, and I’ve since worked on a second picture book with them, Míp, which was published during lockdown in 2020. It was written by Máire Zepf and follows a plucky little robot’s search for alien life on Mars.”

“Everyone is so friendly and supportive of each other,” he says. “Unfortunately I don’t speak Irish. We learned it in school, but it hasn’t stuck with me. I wish it had! I love that I get to support the spread of the Irish language in some small though way by illustrating Irish language
picture books. The folks at Futa Fata are doing amazing work in that regard!”

Going through the process of illustration…

When it comes to working on illustrations and picture books, Paddy tells me that the story comes first.

“Usually the author has gone through lots of iterations, finalised their story and sold their book idea to a publisher,” he explains.

“That publisher then searches for an illustrator for the project. Once I receive the story, then I read it and re-read it, then put it away and come
back and read it again with fresh eyes. All along the way, I’m trying to get a sense of how I can visualise this story, using illustration to bring the characters to life and add another layer to the words.”

Paddy describes a picture book as a harmonious merging of both words and illustration and says that the best picture books are ones which wouldn’t
work if you removed one of the two elements.

“I work in quite a number of different styles, so there’s a lot of sketching and discovery and brainstorming to be done in the beginning, deciding which direction the characters and style could take,” he says.

Paddy emphasises however that sometimes you’re given very specific instructions of what the book should be like and what needs to be included. It just depends on the project.

“I do love the freedom, but it’s so vital to have an art director at the publisher to bounce ideas off and tell you what would or wouldn’t work”.

From there he thumbnails out the book which means that he roughly lays out what each scene would be like on each page. Paddy then sketches the “roughs” for each individual illustration.

“Usually there is also a character study, with lots of sketches of the main characters, their look, emotions etc,” he reveals.

Once that’s all validated by the publisher then he moves on to the illustration. In this case, Paddy works digitally, creating his illustrations in Photoshop through a Wacom Cintiq.

“My background is in graphic design, so I’m so much more comfortable working in digital illustration,” he explains.

“I’ve never formally studied illustration and have no traditional art background, so even my rough sketches are usually on the tablet. The whole process can usually take months to create the art for a picture book, and then you might wait a year or more until the book appears on a shelf!”

Despite being away from home, Paddy says that life in Belgium is very much like being on home turf.

“The people are friendly, and it’s not like I’m ever that far away from Ireland,” he enthuses. “The chocolate and beer are certainly on another level here!”

Paddy tells me that there are a lot of Irish people in Belgium, “as there are everywhere in the world!” and keeps his connection with Ireland alive playing hurling for Belgium GAA.

“We have a fantastic community in the club, and having a group like that when you’re living abroad does really help. The training is intense, the craic is great, and we’re actually current European Hurling Champions! The pandemic put a stop to the season last year, but hopefully, there will be brighter days ahead and we can look forward to getting back on the field again.”

Paddy has been living in Belgium for 12 years now and has also become fluent in Dutch.

“It’s was a tough language to get my head around. The sentence structure has some differences from English, but after a while, it just clicks. I was never much of a fan of languages while at school, but now having a second language really does make you marvel at how the human brain sorts it all out and allows you to flip from one to the other”.

Though Paddy hasn’t gotten to work on any picture books in Dutch yet he hopes that that will change in the future.

The Irishman’s debut illustrated picture book, The Vanishing Lake is being published this April 2021. It tells the story is about a little girl called Meara who goes to visit her Grandad who lives by a lake, which disappears and reappears for no apparent reason.

She constantly asks her Grandad why it happens and each time he has a more extravagant and unbelievable reason for her. Meara won’t believe any of his stories, so she sets out to find the ‘real’ reason.

“The story is actually based on a real place, close to where I grew up in Ballycastle in County Antrim. It’s a lake called Loughareema which actually does disappear and reappear every few days, depending on the weather,” Paddy reveals.

“When you grow up with a wonder like this on your doorstep, you definitely take it for granted, and I hadn’t really thought about it in years,” Paddy says.

“I thought the mystery of ‘why’ the lake would disappear and reappear could be interesting to drive the story, and then setting the character up to be unwilling to believe these reasons, spurred myself on to come up with crazier and crazier ones. That’s how the story started with me and it developed from there”.

Not only that but the accomplished illustrator has already published it in Chinese through Yeehoo Press.

“It was released in China last year! It absolutely feels extra special as my debut story is based on something so close to my hometown. You’ll only ever have one ‘first’ story published, so the fact that mine will always have this connection to home is amazing.”

Will we see more Irish language illustrations from him soon? We hope so!