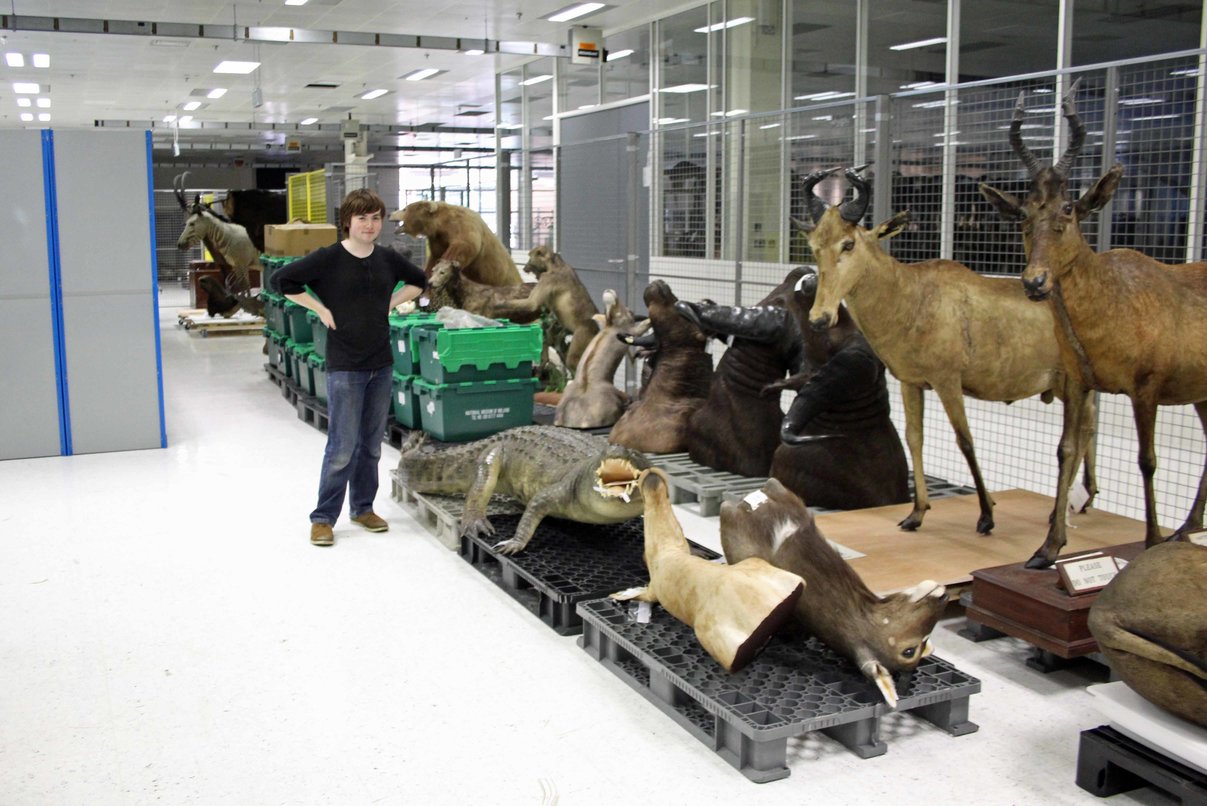 Fionn Keeley is a palaeontologist with a difference, he’s also an Irish video game developer. But let’s backtrack a bit. His story begins on a small farm in rural Ireland.

Fionn was born in Dublin and moved down to a farm in Co. Meath when he was about five years old. This wasn’t as drastic a change as it may seem, however, as his own home in Dublin was already quite rural. Both of his parents were interested in animals and they had plenty of pets. They also worked in wildlife conservation so Fionn was spoiled for choice when it came to indulging in animal books growing up.

Did they perhaps foresee him as being a future palaeontologist?

‘I’m not sure what drew me to extinct animals more than living ones’ he tells me thoughtfully.

‘I suppose I’d always liked mythical creatures too, and I think there’s sort of a fantastical element to prehistoric life, especially when you’re a child. There’s some element of mystery to palaeontology that I really like as well – it sometimes feels like you’re imagining the missing pieces of a jigsaw or trying to work out the colours of a black-and-white photo.’

Fionn didn’t originally plan on being a palaeontologist, it was more so a far-off goal in the back of his mind. Instead, he went to UCD where he studied General Science. It was within that degree that he discovered his interest in geology.

‘I didn’t really decide to continue with a Master’s degree until quite a while into the program, and it was probably my time volunteering at the Natural History Museum in Dublin that sold me on the idea!’ he says.

Palaeontology is the study of prehistoric life. While dinosaurs tend to be the face of palaeontology since they’re big and exciting, Fionn stresses that there are many other aspects to his work as a palaeontologist too like research into the origins of life and how life has responded to things like mass extinctions.

His own thesis focussed on earth’s first animals, and how people can use a combination of fossils and genetic information to work out how these creatures might have evolved.

Because Ireland doesn’t have a palaeontology Master’s course of its own, Fionn moved to Bristol to continue studying after his undergraduate degree.

‘I’d considered quite a few other places including some other European colleges as well as other British universities, but Bristol was ideal for me since they offered a taught Master’s degree as well as an MSc (Masters of Science) by research’ he says. ‘It’s also where a lot of Ireland’s palaeontologists were trained, so quite a few Irish people still go to Bristol for the same reason.’

‘I ended up doing a huge range of stuff in the Natural History Museum, from glueing broken fossils together to preparing sets for TV shows.’

The budding palaeontologist even helped put together a set for an episode of the TV series Penny Dreadful in 2015.

Bristol has a long history with palaeontology more recently hosting events like the ‘Bristol Dinosaur Project’. This particular project was based on the discovery of the Thecodontosaurus antiquus. The fossilised remains of Theco were discovered in 1834 in a quarry on Durdham Downs in Clifton, Bristol. It was the fourth dinosaur to be identified anywhere in the world. The word ‘dinosaur’ didn’t even exist back then. Naturally, with discoveries like that, Bristol was well on its way to becoming a palaeontology hub.

Bristol Dinosaur Project is also, in fact, something that Fionn has been heavily involved in while also being involved with the Bristol Museum and Art Gallery. From organising talks to arranging various school and public events he describes it as being a really rewarding way to look at science from new perspectives.

But wait, how did games come into the picture? Well, Fionn’s first video games were those ‘edutainment’ CD-ROM games that were popular in the nineties. Things like Zoombinis and Where in the World is Carmen Sandiego? still hold dear to him. Pokémon too was a favourite which he says was probably because it was all about looking for magical creatures!

‘There’s something about both museums and outreach work that really interests me – a bit like the ‘edutainment’ games, I think the combination of natural history, cultural history and media really appeals to me in any context,’ he says.

Despite having a keen interest in the concept of game development Fionn didn’t actually consider working in the field until quite recently. Yet impressively, he released his first game Fadó in October of 2019. Not only that but he’s now working on several projects both on his own and as part of a team.

His game Fadó is a retro RPG about Irish myths, a topic and a game genre that he’s always been fond of. Fionn sees the game as a collection of short stories that were in the kind of books that he used to read as a child.

‘I’m hoping to follow it up with further episodes that add to each story and continue to grow its world – since all of the game’s areas are real places, it’s a lot of fun to build on the larger-than-life versions of them established in mythology,’ he says.

Constructing the game began as a hobby with his main motivation being mostly ‘why hasn’t someone done something like this already?’ From there he looked at making a more concrete story and fleshed out game. He ended up working on it on a part-time basis for about two years.

Fionn feels like he learned a huge amount while working on Fadó. It was mostly a solo project apart from help by Georgia Lynch and Peter Kelly on the soundtrack whose input he valued hugely. Fadó was more than just a game, it taught him valuable skills that catapulted him into the game development world.

‘I ended up having to teach myself plenty of things I’d probably never have learned without it. This included stuff like digital art, music composition, animation, marketing and programming – all of which I’d had only a little experience with before,’ he says.

One of the biggest draws for Fionn when creating Fadó was the amount of research involved.

‘I read more or less everything I could find on the people, places and events featured in it, and I feel like only about 5% of that made it into the final version!’ he tells me. ‘I’m starting to understand why so many movies get ‘director’s cuts’ to add ridiculous extra details.’

Fionn is currently helping to develop some educational software focusing on palaeontology and a trading card game. He’s hoping that in future he’ll be able to combine his interests like this even further.

‘I’ve been working on concepts for quite a few natural history or palaeontology-related games over the past few months, and I’m really looking forward to seeing where they’ll go over the next few!’

And so, we have our game-developing palaeontologist!

Despite being abroad, Fionn does miss things back here at home and tries to make long trips whenever he gets the chance. It’s tricky to see where he’ll be in a few years as he’s mainly connected to the science communities in Bristol but also the video game community in Dublin.

‘I suppose it partly depends on what I’m working in. There was something quite bittersweet about having to release Fadó from abroad even though I’d been back to Ireland shortly beforehand since it’s something very deeply tied to Irish culture,’ he says.

‘I’d come to think of it as sort of a link to home after I moved, in a way. That said, I don’t regret moving – I think it’s opened me up to a lot of experiences I wouldn’t really have had at home, and it’s been really exciting too.’

You can find Fionn’s game Fadó on Steam here.