Honorary Freedom of the City of Dublin to be awarded to Ailbhe Smyth, Prof. Mary Aiken and Kellie Harrington 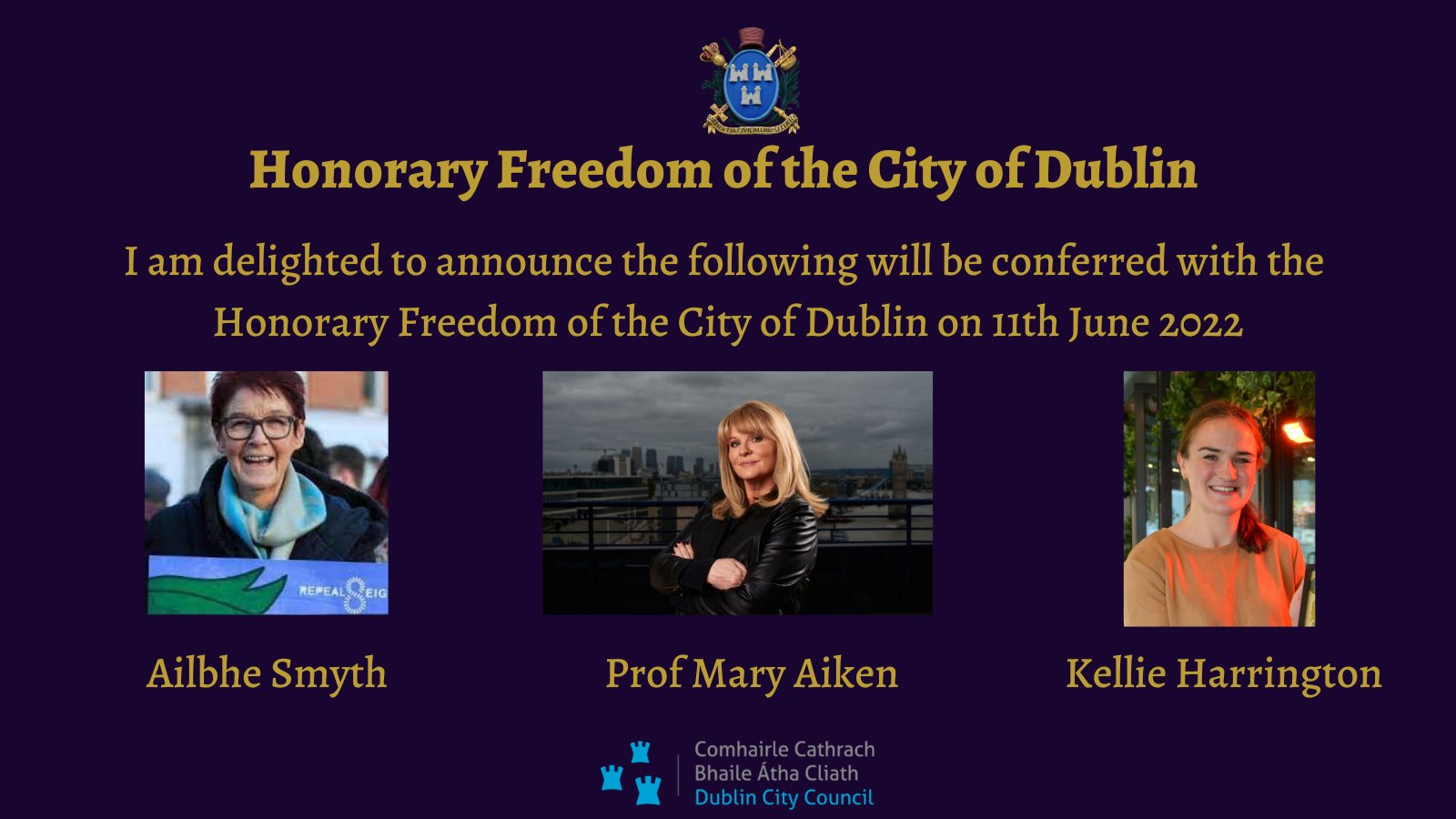 Dublin City Council is to confer the Honorary Freedom of the City of Dublin on Ailbhe Smyth, Professor Mary Aiken and Kellie Harrington following a recommendation by the Lord Mayor of Dublin Alison Gilliland.

Jim Gavin and Dr Tony Holohan were the last people to be awarded the Freedom of the City of Dublin in 2020 and 2021.

The Lord Mayor of Dublin Alison Gilliland and Dublin City Council are paying tribute to Ailbhe, Mary and Kellie for their resilience and public service.

I am honoured and privileged to propose these three women for Dublin City’s highest award, the Honorary Freedom of the City of Dublin. They have made a significant contribution to our city and indeed our country.

They are three inspiring women and I’m delighted to be able to acknowledge their achievements and contribution to Irish public life.

The conferral ceremony for Freedom of the City will take place in the Round Room at the Mansion House, on June 11th.

Amongst the ancient privileges afforded to a Freeman or Freewoman is the right to bring goods into Dublin through the city gates, without paying customs duties; the right to pasture sheep on common ground within the city boundaries; and the right to vote in municipal and parliamentary elections.

Ailbhe is an academic and prominent social justice activist both in the area of LGBT+ rights and women’s rights. She established the Women’s Education, Research and Resource Centre at UCD in 1990 and was a long time campaigner for the repeal of the Eighth Amendment including acting as the co-director of the Together for Yes national referendum campaign.

She was a founding member of Marriage Equality which was so central to the 2015 same-sex marriage rights referendum and chaired the National LGBT Federation for over 10 years. She has been central to social progression in our country. She continues to lecture worldwide and is also currently Chairperson of the Ballyfermot STAR Addiction Services and is a member of the Board of Age Action.

Professor Aiken is one of the world’s leading experts in cyberpsychology – the study of the impact of technology on human behaviour.

Professor Aiken is dedicated to the creation of a safer and more secure online environment for the people of Dublin, the people of Ireland, and worldwide.

She has advised at Irish, European and International levels in policy debates at the intersection of psychology, criminology and technology. In particular, she has contributed to Irish legislation in the area of online safety and digital protection of children.

Her 2016 book, The Cyber Effect, gives a powerful insight into how human behaviour changes online. Amongst other institutions, she has worked with INTERPOL and the White House. In an age where we are constantly under threat from cyber-attacks and where our most digitally vulnerable citizens are preyed upon, Mary’s knowledge and skills are highly significant and valuable.

Kellie is an inspiring ambassador and role model for her local community in the North East Inner City, particularly for young people.

She is also one of the country’s most successful sportspeople showing how determination and persistence can lead to global recognition.

Her most recent achievement was to win a gold medal for Ireland in boxing at the Tokyo Olympics. She has also won gold and silver medals for Ireland at the World Boxing Championships.

History of Freedom of the City of Dublin

Following the Norman Invasion of Ireland, any chartered town or city in Ireland was entitled to admit certain of its inhabitants to the Freedom.

Holders of this ancient Freedom were usually members of the Trade Guilds of the city or town in question and their descendants.

The Honorary Freedom was instituted under the Municipal Privileges (Ireland) Act 1876 and each city in Ireland had the right to confer it.  This differed from the ancient Freedom in that it was purely honorary and there was no entitlement to vote.   It is presently conferred under the provisions of the Local Government Act, 2001.

Holders of the Freedom of the City of Dublin have a number of ancient privileges and duties not applicable to ordinary citizens, some of which have little more than symbolic meaning in the modern world.

Freedom of the City of Dublin Ancient Privileges include: