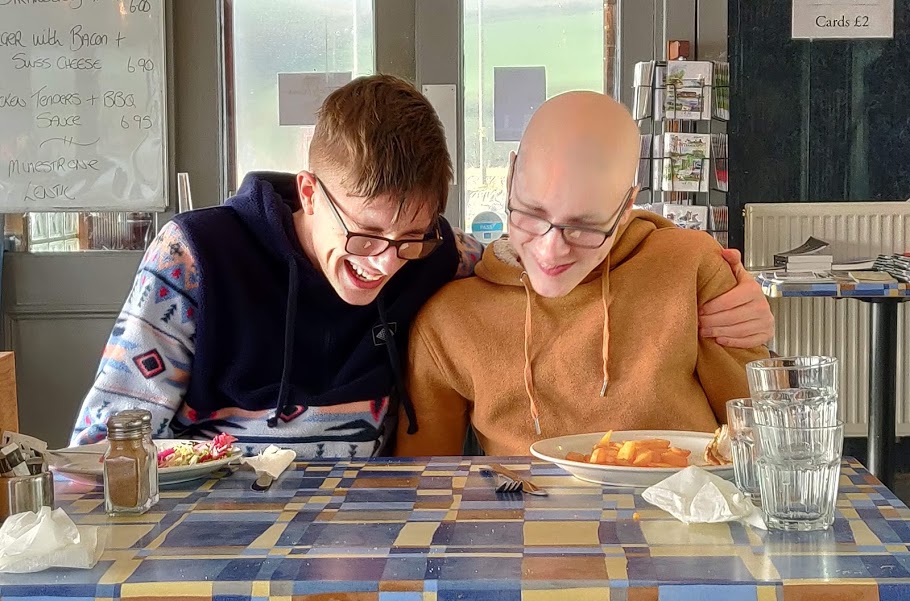 Writing about cancer is not easy, especially when you’re writing about a young person but if you’re looking to read about two people who are truly inspirational then you need to look no further than Finn Wallace and his mother Sharon.

Finn is growing into a fine young man and lives with his family in Scotland. He is kind and caring, quick-witted and has a sharp sense of humour. He likes cooking and baking and can throw out some amazing bread (which his mom, Sharon, tells me must be served with Kerrygold!).

But the 15-year-old was recently diagnosed with Rhabdomyosarcoma, an aggressive form of cancer and as a result of his chemotherapy, was told that he would lose his hair. Finn decided to crop his locks before he lost them, so someone else could potentially benefit from them – a courageous decision no doubt.

I spoke to his mom, Westmeath-native Sharon, about Finn’s journey to cut his hair. Sharon was born in Athlone and is the eldest of four kids. She accepted a job in Scotland with Standard Life on graduation and has been living in Edinburgh for the past 26 years.

‘Turned out to be one of the best decisions I inadvertently made; I love this town!’ Sharon tells me. It was while working at Standard Life that she met her husband, Ian.

‘We have four sons, with Finn being the second of these. He is 15, his older brother Sean is 17 (in the lead image with Finn), Rowan is 13 and Angus is 11. And Finn would go through me if I didn’t mention Queenie, our little schnauzer, and his best pal!’

In August of last year, Finn was admitted to hospital after a visit to A&E while in serious pain. The Wallaces had been up and down to the doctors several times and couldn’t get to the bottom of it. They found a lump in his groin, conducted some scans, and quickly got him to theatre to remove it.

‘Having initially been advised it was one form of cancer and awaiting biopsy for confirmation, we were naturally shocked to be called to the Royal Hospital for Sick Children in Edinburgh and be told that the tumour was rhabdomyosarcoma,’ Sharon tells me.

Sharon says that it felt like the carpet was being pulled out from under them. Finn’s oncologist explained how he would have to have nine rounds of chemotherapy, probably further surgery and radiotherapy as part of his treatment and that would run till probably June of this year.

‘I remember her saying “I’m really sorry to say this, but we are about to take over your life”. And that has lived out to be very true,’ Sharon says.

‘From the outset, I have been adamant that this rotten, horrible, crappy, scary chapter Finn has to get through will be a SMALL part in his very LONG and healthy life. This treatment plan is to CURE him. Cancer just doesn’t happen to the person with the tumour, its ripple effect is wide. The other boys, in their own way, have had times when they’ve been scared, worried, anxious.’

Because of the intensity of Finn’s appointments and hospital visits, Sharon stopped work. Her primary focus was on Finn and getting him through his treatment plan, and back to being a healthy happy teenage lad.

‘A very close second to this is focusing on the other three lads, making sure they are ok, have the support they need, and maintaining our usual family life. Keeping things as “normal” as possible is really important to me,’ Sharon stresses.

‘I hope that by Finn keeping going to his piano lessons, and Angus still getting to have friends over for a play, and arguing over homework and what-time-do-I-have-to-be-home-for, reinforces to all four lads that our family will endure this and get through this, and come out the far side stronger for it.’

When Finn’s oncologist explained how chemotherapy would cause his hair to fall out, this was quite hard to deal with as he had really long hair that was down beyond his shoulders. Sharon told him about a friend’s daughter who had decided to cut her long hair short and donate the hair to a charity that made wigs for kids with cancer and so Finn agreed to part ways with his locks.

‘I was going to lose the hair anyway, so I thought that someone could use it to make a wig for someone else who might want to wear one. No point letting it go to waste,’ Finn tells me. The Wallaces decided to fundraise for the Teenage Cancer Trust as they had been incredibly supportive since Finn’s diagnosis and the page on JustGiving was set up.

‘It asked us what our fundraising goal was, and we thought “wouldn’t it be great if we got to £500?” And in the last moment, I kind-of went “what the hell, let’s say £1000” even though I thought that was really ambitious and pushing the boat out!’ Sharon muses.

In just a few hours after setting the fundraiser live, they had hit the £500 mark and the next day it passed £1000 and kept climbing. Sharon says that it was both overwhelming and humbling. To date between the fundraiser and donations offline, they’ve raised a whopping £16,000.

‘We never expected it to take off like that. It certainly brought lots of smiles to all our faces’ Sharon says beaming. ‘I’ve always been an optimist and try to raise my kids to see the brighter side of life. This was just a wonderful example of Finn creating a real positive out of a negative situation.’

‘It feels great to think that the money we raised will help other teenagers in the future when they have to deal with their cancer’ Finn says. The pair say that it was a real boost for them to be able to give back to the Teenage Cancer Trust.

‘I told Finn from the very outset that if I could shoulder this for him, go through all the treatment for him, I would in a heartbeat. But I can’t. What I have promised him is that I would be with him every step of the way, by his side, holding his hand, whatever it took to support him through it all,’ Sharon says.

‘He has shown so much strength and resilience in taking all this in his stride and has never complained once or said, “why me?” He gets ulcers in his mouth called mucositis, he often has trouble sleeping for the week after his chemo sessions, he is constantly pricked and prodded with cannulas and grippers and needles, and he just keeps on smiling.’

Sharon’s dedication to Finn and his siblings shines through and I’m very taken by how she remains so upbeat and positive.

‘We know things could be significantly more challenging for Finn, and prefer to focus on all the positives that have come from it: Finn and Sean have gotten much closer as pals as well as brothers, cancer has helped us explore and share our feelings more, and Finn says “taking a shower is so much faster when you don’t have any hair to wash!” And of course, the fundraising as the cherry on top.’

‘We are in a less than ideal situation right now, as a family, but this will only be a SMALL part of a LONG family history! We have only one goal and that is a happy healthy Finn by the end of the summer.’

Though the Wallaces are based in Scotland, Finn and his siblings see themselves as Irish just like their Mammy.

‘I once overheard Sean, Finn and Rowan having a conversation when they were probably about 12, 10 and 8. They were talking about the fact they all have Irish passports, having an Irish mammy and the notion of being Irish’ she tells me.

‘Finn said he felt more Irish than Scottish and felt very much at home any time we travelled home to Ireland. He is the one who uses the phrase “going home to Nana’s”. He has a very special relationship with his Nana, my mam and did also with my sister. Given the chance, he would move to Ireland in the morning.’

‘There are often debates about where we would live if we moved to Ireland.  He once got cross with me as I was filling out a school form where I had to tick which nationality he was, and supposedly I shouldn’t have ticked White British, but White Irish instead!’

Many thanks to Sharon and Finn for speaking with me. You can donate on their charity fundraiser page here. Read more about inspirational Irish people here.