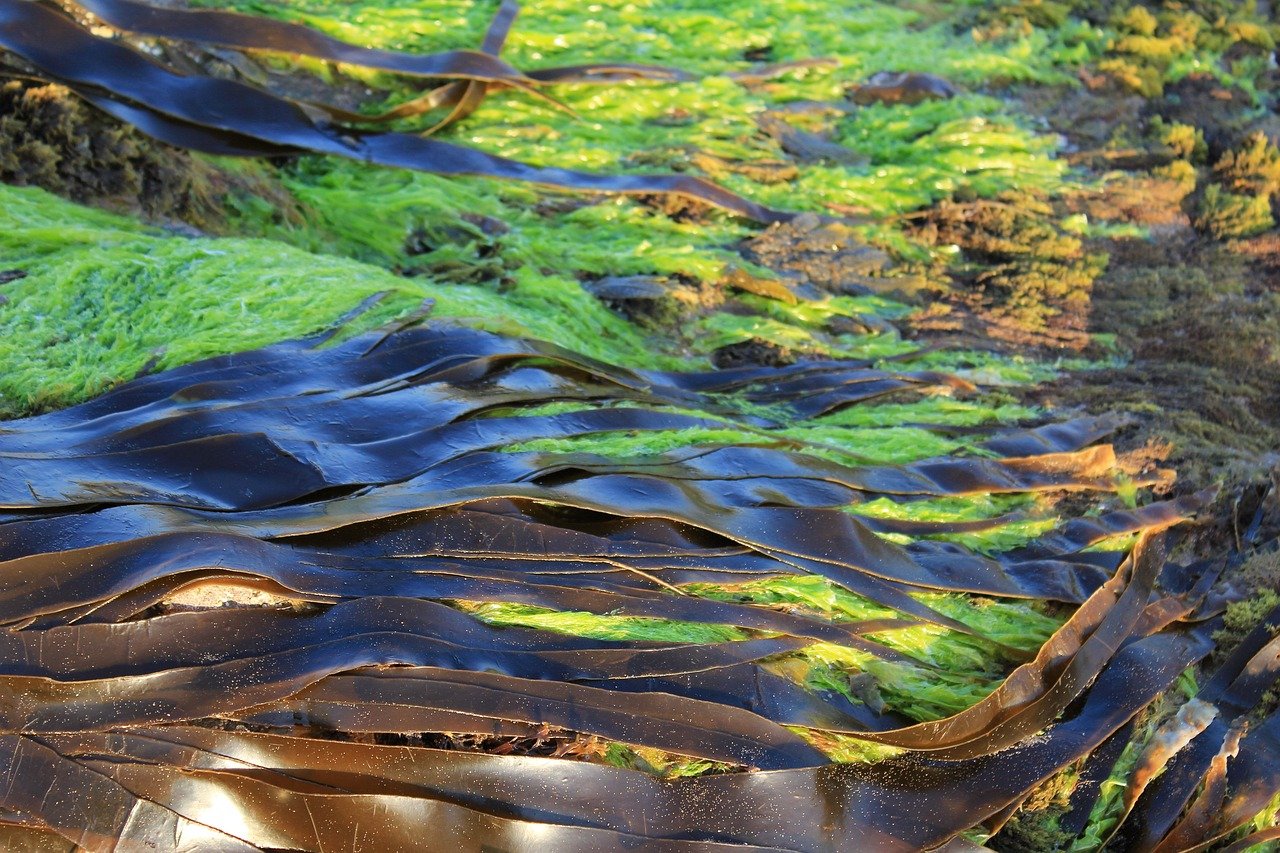 Those who follow me on other forms of social media know that I absolutely love seaweed. It’s something that I forage for on the regular and enjoy with many meals. Seaweed is rich in nutrients and so freshly found along the Atlantic coast that I constantly marvel at how much is available on our shores.

Irish seaweeds are not only used as a food source for foragers like me but also as an impressive natural fertiliser for the garden.

If you’re looking at how to pronounce these words, check out the links I’ve provided or when not available, see Abair.ie for its in-built synthesiser.

Here are wonderful Irish words for seaweed that you can enjoy today:

Palmaria palmata. One of the better-known seaweeds, you can often find duileasc sold in its dry form where people often just chew it as it is. Some people forage this tasty seaweed from the beach and place it onto their car dashboards to help dry it out while they drive along.

Chondrus crispus. Plenty of Irish people have heard of Carrageen Moss which was used in traditional Irish desserts or indeed as a cure for the common cold. The word in Irish means ‘little rock’. Did you know: a similar seaweed, Mastocarpus stellatus (Clúimhín Cait) is often collected alongside Chondrus crispus and sold under the same name Carrageen/Irish Moss.

Porphyra species. Sleabhac is often used in a traditional Welsh dish called Laverbread. As Dr Prannie Rhatigan notes in her book (linked below), on Innishmurray, sleabhac was harvest right after the first heavy frost of the year (usually in January).

Fucus vesiculosus. The is a common brown seaweed that’s found on Irish shores. Many seaweeds like bladderwrack contains varying levels of iodine, which can be used to treat some thyroid issues.

Alaria esculenta. Alaria, a genus of brown alga, can be dried and eaten as a food and is an excellent source of iodine. It’s very, very similar to Japanese wakame and in fact is sold in Ireland often as ‘Atlantic wakame.’

Pelvetia canaliculata. In Dr Rhatigan’s book, she notes that there is photographic evidence of sheep grazing on this particular seaweed!

Codium fragile subsp. tomentosoides. Too rare to forage, I get excited when I see the spúinse. Leave the velvet horn alone to flourish in its natural environment.

Ulva lactuca. I often eat bits of this as I would normal lettuce though of course, the texture of glasán is quite different. As with all seaweeds, make sure you’re not foraging in a place that could potentially be polluted.

Laminaria digitata. This is a large brown seaweed that often grows between 1 – 2 metres in length. This kelp is harvested in low tides and is popular for those who use it as a soil fertiliser.

Ascophyllum nodosum. This is a seaweed that was used traditionally to feed animals and was said to encourage better yield of produce.

Want to see some of them in the wild and see what else you can forage on Irish shores? Check out my video on coastal foraging below:

Sources: The Irish words for seaweed researched for this article came from my own knowledge, different Irish dictionaries, online resources as well as Cois Trá by Mairéad Ní Nuadháin, and Prannie Rhatigan’s brilliant Irish Seaweed Kitchen.