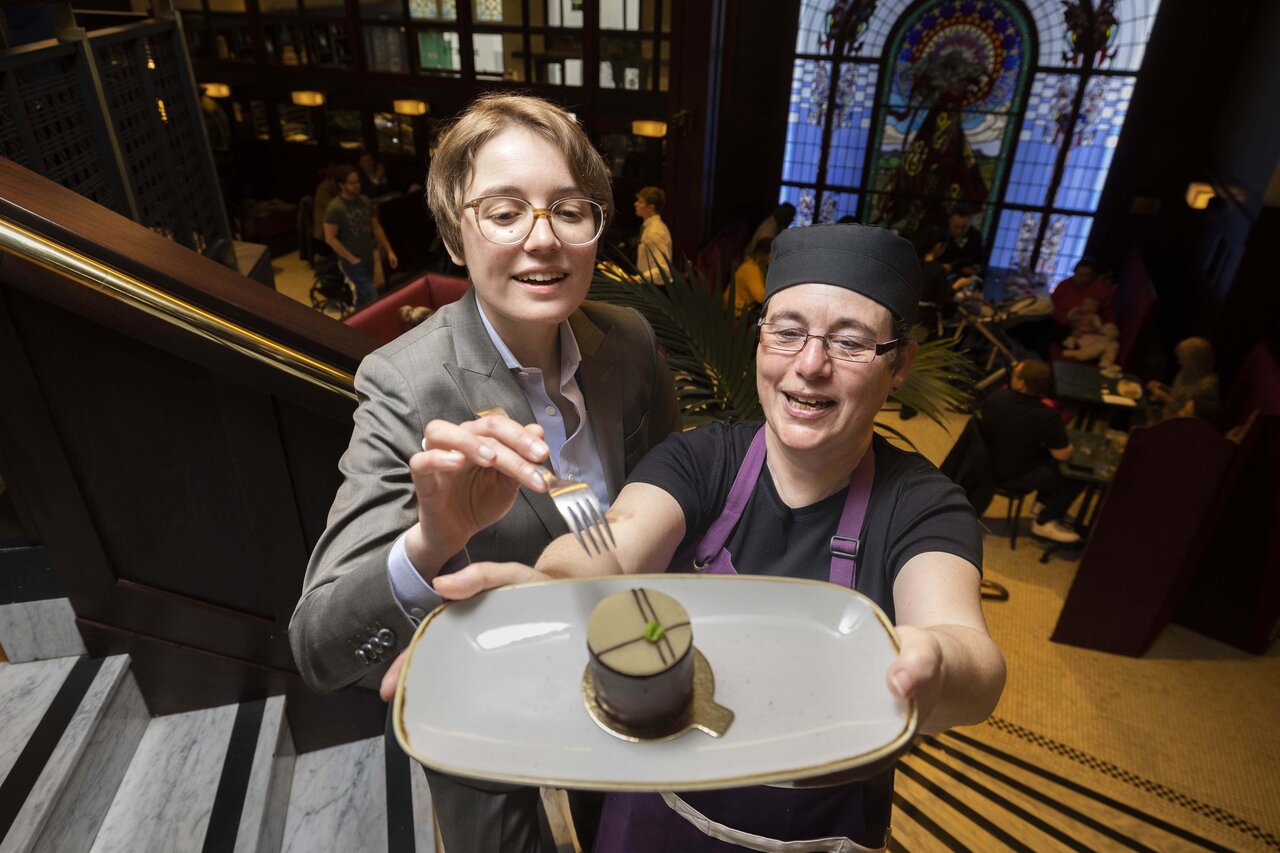 The Mary Cake was a famous staple of Bewley’s Café in Grafton Street since its introduction in 1956 by a Hungarian refugee – but the recipe was lost during extensive renovations two decades ago.

But the 20-year mystery surrounding one of Dublin’s favourite cakes has been solved thanks to a chance meeting between two granddaughters who shared a passion for keeping the iconic dessert alive.

The treats are mini-towers consisting of a rich chocolate filling on top of a sponge base, all encased in chocolate and topped with a disc of marzipan.

Since the recipe was lost, numerous attempts have been made to recreate its unique taste from memory, but none succeeded until food detective Hazel Carmichael, granddaughter of Bewley’s owner Victor Bewley, traced Carolina Malagon on the internet.

Carolina’s grandfather Henry Spelter was a confectioner who fled Budapest on foot following the Hungarian Uprising in 1956.

He was among a number of refugees offered training and employment by Bewley’s when they arrived in Ireland.

The Bewley family came to Ireland as refugees and the business, founded on Quaker principles, has been helping Ireland’s new arrivals since 1840.

Hazel, who lives in Rickmansworth, northwest of London, and New York-based Carolina, met for the first time in the flesh in Dublin this weekend to relaunch the Mary Cake, which is back on the menu thanks to their collaboration.

The original cakes have been brought back to life by Bewley’s and will now be sold in aid of the Irish Red Cross, with €1 from every purchase going to support the charity.

When Hazel, who is a confectioner by trade, was asked by Cól Campbell of Bewley’s to recreate the original Mary Cake, she was determined to find the secret of the creamy chocolate filling that did not need refrigerating.

She discovered that the Mary Cake was an after-work collaboration between Mr Spelter and Hazel’s great uncle Alfred, based on a Hungarian Marika Cake recipe but adapted to suit the Irish palate.

Alfred suggested that in the afternoons, Henry could produce samples of the craft he learned in Hungary. One young baker, Barney, helped him and tried to ease his difficulties in adjusting to a life in Ireland

Anxious to find this recipe, Hazel went in search of Mr Spelter and found that he had emigrated to the US, but had died just a week previously at the age of 95.

However, his obituary mentioned his pride in working in Bewley’s, and Hazel left an online message of condolence while continuing to experiment with recipes to recreate the magic cake.

She was intrigued about who the mysterious Barney was, and was amazed to discover that he was none other than Bewley’s head baker Brendan Johnson, who had produced Mary Cakes for her wedding.

A month later she was contacted by Carolina, who was also fascinated by the cake, which Mr Spelter had continued to make in the US using local ingredients – keeping meticulous notes on the ingredients.

The two have become firm friends, Carolina searching Henry’s notes and Hazel working on further trials, without finally cracking a mystery around the use of cream in the cake.

However, during a trial workshop day in the Café, Hazel discovered a Bewley’s Bakery cost ledger from the 1970s which listed the ingredients in large quantities.

From that, she followed the clues that her Uncle Alfred had replaced the original Hungarian cream with butter, and added good quality chocolate.

The Mary Cake was reborn.

“I feel like I have been treading in the footsteps of my great uncle as I have researched, tested and redeveloped the Mary Cake recipe,” said Hazel.

“I have repeated what Alfred and Henry did 65 years ago – taken a Hungarian Marika recipe and adapted it for the Irish palate of the day.

“This is a story about refugees fleeing war and coming to Ireland, bringing with them their skills and heritage, and what can happen when these skills are recognised and given a chance to flourish.

“The story of the Mary Cake can teach us a lot about welcome, respect and opportunity for all.

“We are both thrilled that Bewley’s have pledged to support current refugees by donating proceeds from Mary Cake sales to the Red Cross, to help with their work supporting Ukrainian refugees in Ireland.”