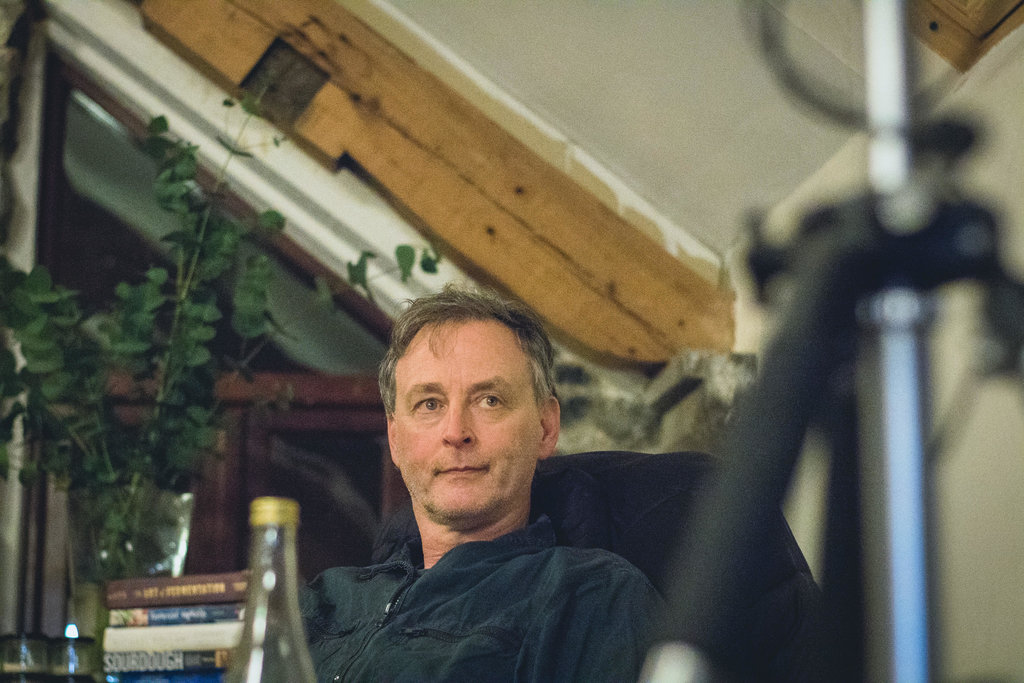 Keith Bohanna, the co-founder of Real Bread Ireland, was born in Wales to Irish parents and lived in the UK for a few years before moving back to Carlow where he eventually grew up. His career portfolio is anything but boring.

Are you ready? Keith kicked off his career with Chartered Accountancy, ran and co-owned a recycled cloth clothing factory, had a digital strategy consultancy for 15 years, founded two startups and now is building a new specialist team with the Bank of Ireland. And yet, ultimately it is food that has played a vital part in his life.

‘Food is separate to all of that,’ he tells me. ‘It’s been important to me since I became vegetarian at the age of nine for ethical reasons; I didn’t see why animals had to die for food when there was no need. Probably key to that was also living close to a slaughterhouse.’

Keith became a vegan back in 1990 while living back in the UK and developed an interest in ethical consumption through Friends of the Earth (a company that campaigns for environmental justice and sustainability).

‘Veganism happened when I was 25 and started to understand that the dairy and beef industries are two halves of the same sector and are co-dependent. I couldn’t support one without also supporting the other. So, I stopped both.’

He eventually got involved with the Slow Food Movement in Ireland and also started a series of evening storytelling sessions with small scale producers and farmers and growers in conjunction with his friends Julie and Rod Calderpotts in Highbank Organic Orchard in Kilkenny.

The co-founder of Real Bread Ireland, Keith came up with the idea following the series of storytelling sessions which was branded Biabeag (small food).

‘I was really interested in the stories of the three bakers that I kicked off with and decided to explore something like the Real Bread Campaign in the UK but a lighter version of it,’ Keith says.

The result of his idea was the creation of a support network joining together real bread bakers in Ireland.

‘I lead that with the trust and support and cooperation of initially six bakers and what is now a network of 130 bakers, millers and grain growers with others such as people giving sourdough baking courses also involved,’ he tells me.

‘My love for small food producers which manifests in Real Bread Ireland is separate from my thoughts on animal use and production. It comes from a love of the passion of small-scale food producers and an almost lifelong habit of buying organic vegetables directly from the farmers growing them.’

When approaching businesses to be a part of the movement, Keith tells me that they have always been supportive and interested in the concept. It has grown slowly but steadily.

When asked if we perhaps have too much information available to us as consumers Keith says that the real challenge appears when a lot of information comes from skewed sources or inherent biases. This can make it very difficult to make an informed decision as a consumer.

‘Related to that the supply chain for food is crazily complex so informing yourself on any particular nuance of it can be a focused piece of work and a lot of people don’t have the time, interest or even the basic knowledge required to know where to start.’

‘As with every part of the world – which I realised when listening to farmers and fishermen in the Slow Food global gathering the couple of times I attended – the key challenge for me is the dominance of the global multinational conglomerates whose interests span seed businesses, fertilisers and insecticides and pesticides and then the food brands that dominate the shelves in most stores’ Keith tells me.

‘Not only the obviously large brands but the increasing cluster of ‘niche’ brands they also own – for example, Unilever with Ben & Jerry and Swedish Glace ice creams, Pukka teas and Vegetarian Butcher plant-based foods. Their dominance of distribution and shelf space makes it so difficult for small scale indigenous brands to commercially compete.’

For Keith, it’s important to have a solid support network for small businesses.

As a network, Real Bread Ireland is mostly focused on helping to support members to become more resilient and commercially stronger as that is where the sustainable growth of the sector comes from.

‘The real bread movement of which we are a small part tries to strip everything back to simple. Three or four ingredients and a helping of time. That’s it!’

You can read more about the Irish Food and Drink industry here.