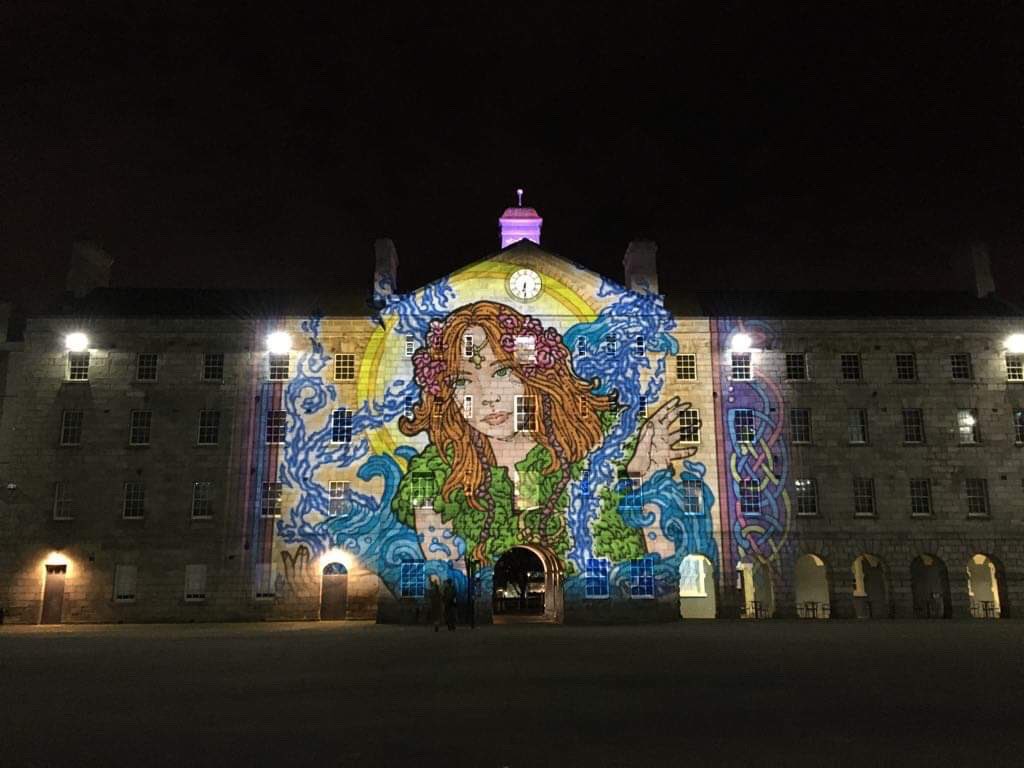 The illuminations were projected onto public buildings amongst them the G.P.O, Belfast City Hall, Titanic Museum, EPIC Museum and National Library.

Herstory is a movement which seeks to ‘give the public authentic female role models and a game-changing egalitarian education programme.’

The movement documents stories from historical figures to mythic and modern women.

‘We are dedicated to a democracy of representation,’ they say. ‘As Mary Robinson would say herself, she is no more important than any other Mary. i.e. celebrities will not be given preference over other voices. This is equality.’

‘We are dedicated to the deconstruction of fixed gender ideas and representations. Sexuality is diverse and should be represented in all its unique expressions,’ they say.

The Herstory Light Festival launched in 2017 as a grassroots light festival and quickly gathered viral momentum around Ireland. Castles, museums, theatres, libraries and more were illuminated in celebration of women and girls.

The festival went international in 2018 with people in the US, UK, Spain, Sweden, France, Lithuania, Slovenia, and Poland participating.

Herstory’s documentary in conjunction with the EPIC Museum aired on RTÉ One on February 3rd. The series which celebrates the achievements of Irish women and will consist of six programmes which will run until International Women’s Day. Other women in the documentary include:

Lady Mary Heath, a record-setting aviator from Limerick in the 1920s.

Kay McNulty, a Gaeilgeoir from Donegal who was one of the six original programmers of the ENIAC (the first electronic general-purpose computer).

James Barry, a pioneering surgeon from Cork who lived as a man to pursue their medical career.

Mother Jones who was described as ‘the most dangerous woman in America’, an activist and union leader who founded the Social Democratic Party and helped establish the Industrial Workers of the World.

Oonah Keogh, a successful trader and entrepreneur from Dublin who became the world’s first female member of a Stock Exchange

Ninette de Valois, a Wicklow-born choreographer and founder of the Royal Ballet