TG4 announce series of late-night concerts over the Christmas period 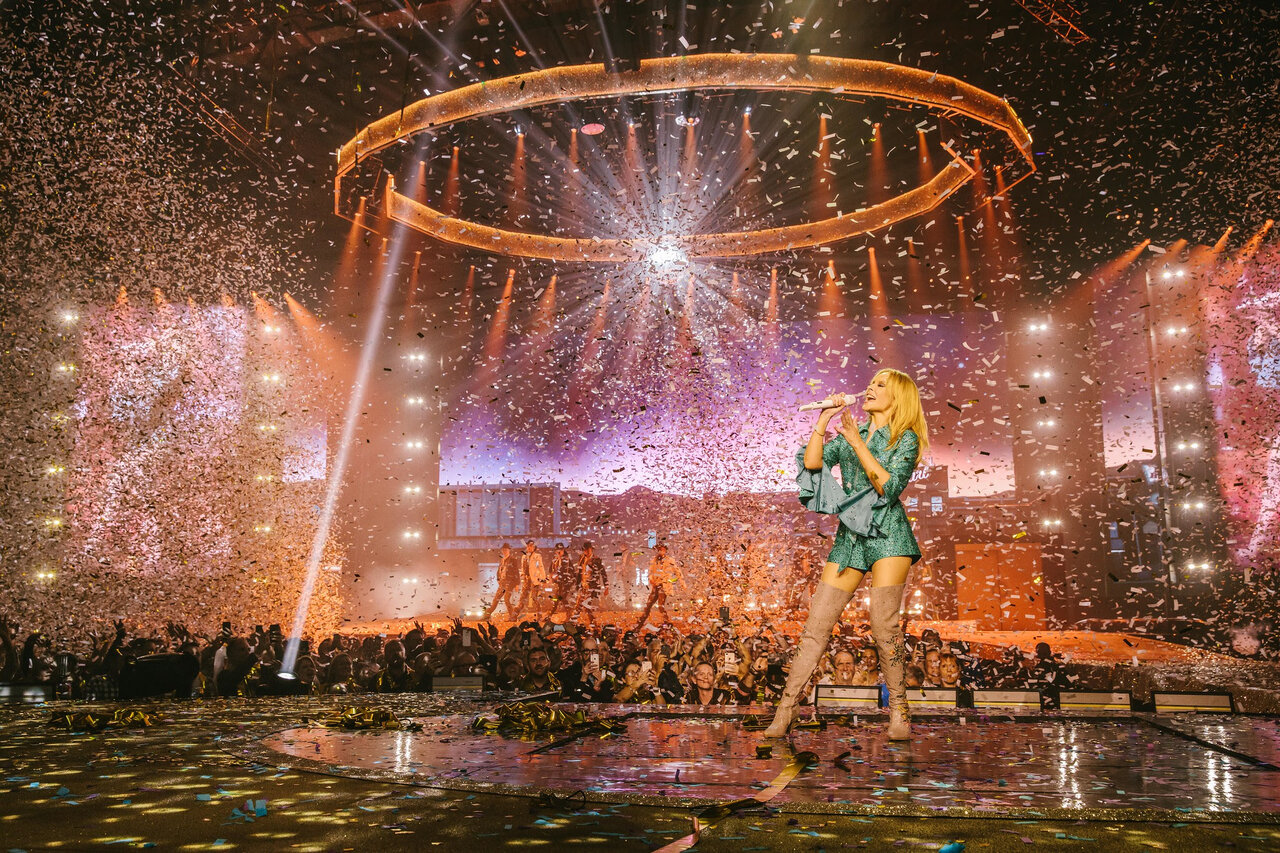 TG4 is continuing its Christmas tradition of late-night concerts for the festive period. This year’s concerts include global music makers such as Coldplay, Kylie Minogue, Paul Simon, Journey, and Fleetwood Mac.

Filmed over three nights in an intimate setting at a sound stage in Los Angeles, the band performs songs from Rumours including Don’t Stop, The Chain, Go Your Own Way, Dreams and You Make Loving Fun as well as favourites such as Rhiannon, Say You Love Me, Sara and Tusk.

John Denver is one of the most successful and best-loved recording artists of the 20th century. His easy-going manner, fine voice, superb songwriting, and dedication to environmental issues all combined to build a huge global fanbase that has continued to grow since his untimely death in a plane crash in 1997.

This 1986 concert, from the NEC in Birmingham, is packed with classic John Denver songs all delivered with his characteristic charm and good humour.

Directed by four-time Emmy® Winning Director Jim Brown, this film provides insight and revelation during America’s 1960s iconic, hope-filled era. Capturing the spirit of America’s Folk Renaissance at its zenith, when folk music dominated the Top 40 charts and songs written straight from the hearts of idealists, activists and poets provided the soundtrack for enormous, unprecedented changes in the American social-political landscape.

A critically acclaimed must-see concert documentary recording a seminal performance in Aretha Franklin’s career in 1972. Shot 47 years ago by Sydney Pollack but only constructed within the last decade. The audio recording went on to become the biggest selling live gospel concert of all time. The event took place after Franklin had scored numerous chart hits and was encouraged to return to her roots by Jerry Wexler at Atlantic Records and record a live concert celebrating her gospel beginnings with a local Baptist choir and the Reverend James Cleveland – a huge inspiration in her early musical career.

The Canadian pop-rock singer was captured live in performance at Sydney Opera House in 2011. The concert was part of Adams’ ‘Bare Bones’ tour and saw him play hits including ‘Run to You’, ‘Let’s Make a Night to Remember’, ‘Summer of ’69’, ‘The Only Thing That Looks Good On Me Is You’ and ‘Have You Ever Really Loved A Women’.

Hot from her triumph at the 2007 Brit Awards where she won Best British Female and her Ivor Novello award for Best Contemporary Song – ‘Rehab’, Amy Winehouse performed live at the Shepherd’s Bush Empire. This amazing concert featured songs from her hit album, ‘Back To Black’, and 2003’s Mercury Music Prize-nominated album, ‘Frank’.  Featuring songs such as Tears Dry On Their Own, Rehab and Back To Black.

In June 2011, Paul Simon thrilled hometown fans with a special club performance at New York City’s historic Webster Hall. The show was the culmination of a sold-out and triumphant U.S. tour. The set list was drawn from Simon’s legendary career and included several songs that had not been performed live in many years including ‘Kodachrome’, ‘Mother And Child Reunion’, ‘Still Crazy After All These Years’, ‘Late In The Evening’, ‘Sounds Of Silence’ and ‘The Obvious Child’.

The film was directed by Paul Dugdale and includes performances of ‘Mylo Xyloto’, ‘In My Place’, ‘Yellow’, ‘Princess Of China’, ‘Viva La Vida’, ‘Charlie Brown’ and ‘Paradise’.

Filmed during the week that their Escape album hit the number one spot in the USA, this is Journey at their peak. The recent addition of keyboardist/co-songwriter Jonathan Cain proved to be the final addition that the constantly changing concept band would need to smash both radio and retail charts. Songs include Journey hits Don’t Stop Believin’, Stone In Love, Who’s Crying Now, Open Arms, Anyway You Want It and Lights.

This heartfelt story charts singer-songwriter Mic Christopher’s humble beginnings busking on the streets of Dublin, his rise to rock star, the near-fatal accident that nearly left him millimeters from death, through to his final year where he lead an entire generation of Irish musicians onto fame, success and new artistic highs.

Told through the eyes of those whose lives he touched (Oscar-winner Glen Hansard, writer/actor Sharon Horgan, Mike Scott of The Waterboys, Bronagh Gallagher, Josh Ritter, Lisa Hannigan, Rónán Ó’Snodaigh and many more. This epic story of extraordinary music and friendship will both touch and inspire.

For over five decades now, Rod Stewart has been an iconic force in popular music. Through his infinitely expressive voice, sly wit and a truly electrifying stage presence, Rod has earned himself a place in the hearts and lives of millions of fans worldwide.

Accompanied by a full band and 60-piece orchestra with a gospel choir, Rod performs his best-loved hits and classic repertoire from the Great American Songbook with special guest appearances from Ron Wood and Chrissie Hynde. Songs performed include ‘Stay With Me’, ‘Maggie May/Gasoline Alley’, ‘Sailing’, ‘Handbags And Gladrags’ and many more.

Filmed at various UK venues over the course of Kylie Minogue’s tour of the same name in late 2018, Golden: Live in Concert is a beautifully shot record of a performer at the top of her game. Off the back of her No. 1 album released earlier that year – her 14th studio album – and containing a host of her biggest hits from through the years.

Captured live at the Point Theatre, Dublin, in front of 10,000 screaming fans on the closing nights of the Winter European Tour in support of their thirteenth studio album Around the Sun. Songs performed include ‘The One I Love’, (Don’t Go Back To) Rockville, ‘Great Beyond’, ‘Imitation of Life’, ‘Losing My Religion’.

In November 2007, James Taylor and Carole King, joined by the same Los Angeles band who played with James and Carole when they first appeared at the Troubadour in 1971, re-united for six shows to celebrate the 50th anniversary of the legendary LA club.

James, Carole and the band who became The Section – Danny Kortchmar, Lee Sklar and Russ Kunkel – together performed a remarkable set of songs. Peter Asher, who was deeply involved in the original 1971 show, produced the recordings of the six-show reunion; Martyn Atkins directed the filming with a nimble crew to capture what became a much-anticipated and historic program.

An Evening Of Nostalgia with Annie Lennox captures one of music’s most acclaimed artists in her only full concert performance of songs from her Grammy-nominated Nostalgia album.

Lennox demonstrates her distinctive vocal and performance talents on an array of classic American standards to one of rock n roll most enduring classics. She concludes her extraordinary show with a selection of her own hits performed solo at the piano. Filmed by director Natalie Johns.

You will be able to watch the late-night concerts on the TG4 player here.