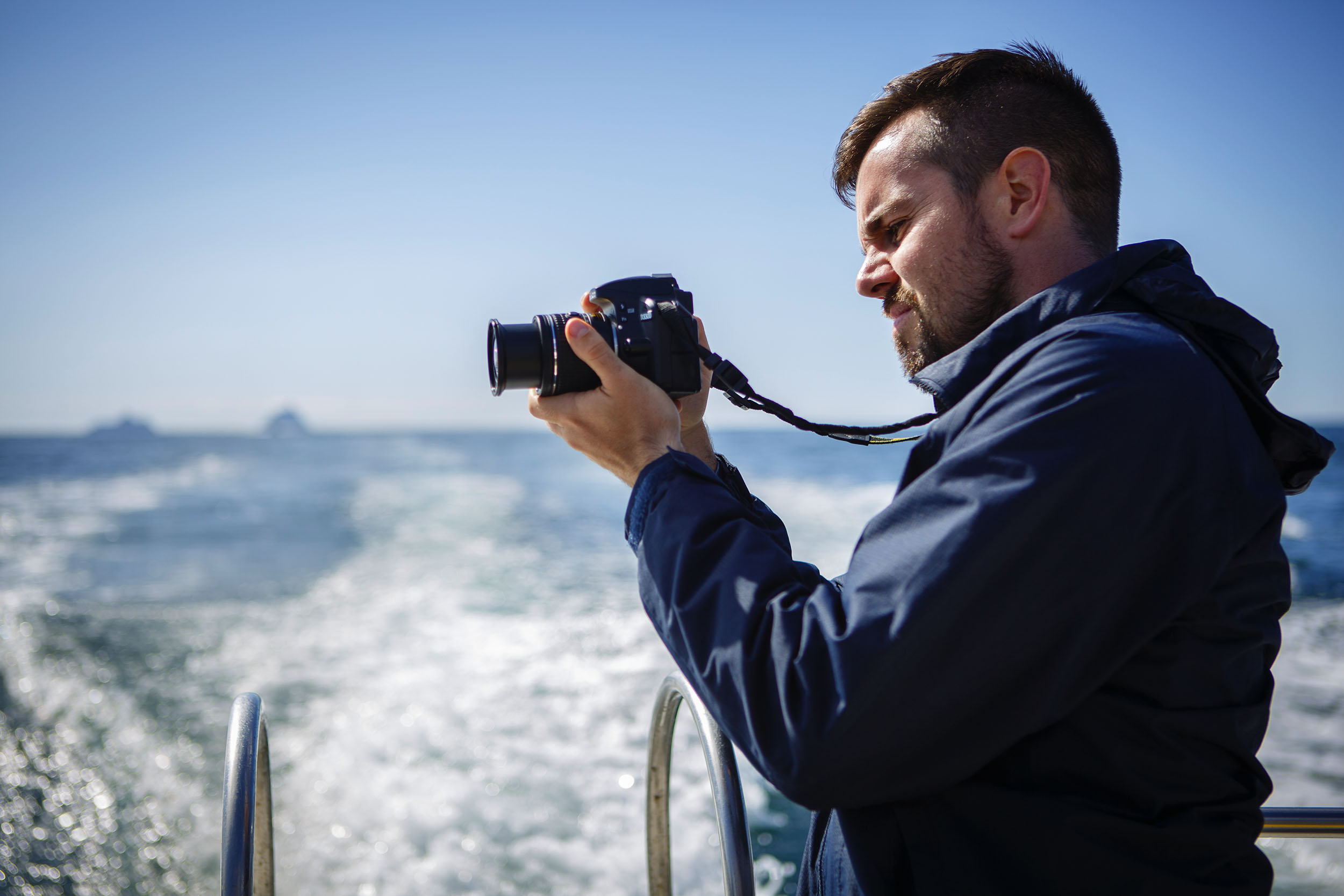 Director and writer Eoghan Hand is a Kerryman but when he was little he moved around between Tipperary, Cork and even the south of France before returning to the Kingdom.

Eoghan always had a vivid imagination growing up and loved to play-act as well as things like clay, woodwork, drawing and metalwork.

‘I always had an interest in film from a young age too,’ he tells me. ‘I was only 10 when they brought out a remastered version of The Empire Strikes Back and saw it with my dad. It just blew me away, it was a spectacle I could never have imagined. It just filled me.’

Eoghan’s journey into the filmmaking world probably began in his teenage years during a ‘Coca Cola Blastbeat’ Battle of the Bands music competition he says.

‘There was a film crew for each school and my friend Ian Kennelly wanted to film the performances and asked me to do it with him,’ Eoghan tells me.

‘I just liked the natural buzz of filming live events. We both enjoyed it a lot and managed to end up winning best music video. I knew I wanted to do it a lot more.’

Eoghan wanted to go to I.A.D.T in Dún Laoghaire but tells me that he ‘didn’t have a portfolio and didn’t have the confidence or belief to pursue it’ and so ended up studying Economics and Politics in UCC.

This is something that he enjoyed but didn’t love. Despite this, it was here while studying for his degree and Masters that he discovered his interest in human behaviour and so, he began to write stories.

‘I used to hate writing, but I found I needed to write down stories and I slowly accepted them; I wanted them to become a reality.’

‘I then went to work in Penneys. I had a lot of time to think while working so I wrote some short film scripts and my parents encouraged me to pursue screenwriting.’

‘I didn’t have much confidence. But I attended a short screenwriting course with Listowel Writers Week and a screenwriter called Conor McDermottroe led the course. I was fully ready to pack it all in but he told me I had the talent and knack for it, so for the first time, I had the belief to pursue it further.’ – Eoghan Hand

Eoghan applied for an M.A. in screenwriting in I.A.D.T. and this time was armed with a portfolio of scripts. He loved the experience.

‘The first day didn’t go well. Everyone on the course used to be sub-editors or former journalists,’ he explains. ‘I was the Kerry fella who was folding t-shirts in Penneys.’

But his studies in I.A.D.T. taught him about perseverance and various styles of screenwriting and so he intensely began to look at human behaviour.

‘We got to write feature-length screenplays and watch films daily. It was heaven.’

The course only lasted a year and as Eoghan came to look for work he quickly realised that as a screenwriting graduate he wasn’t going to be flush with offers and so he went back to work in Penneys.

‘I had more purpose though and Ian Kennelly once again arrived at a critical juncture in my life,’ Eoghan says. ‘He pointed out there was this course called Broadcast Production Skills he wanted to do and reckoned I would like it. The bizarre part was that it was in Tralee and studio blended into the main building at Kerry College (formerly Kerry ETB).’

Eoghan says that you wouldn’t spot it from the road but it was only when they walked in that he realised the studio and its vast array of equipment was like stumbling up a dragon’s lair filled with hidden gems.

‘We knew we had to get on the course at all costs. I was a screenwriting graduate with no technical skills whatsoever. Ian was the opposite. But we both managed to talk our way in. I got it purely on sheer enthusiasm’ – Eoghan Hand

Eoghan tells me that that it was easily one of the best courses he’s ever done and it was the hands-on and technical aspect that was brilliant. There he learned how to set up lights, cameras as well as the nitty-gritty behind directing and producing.

‘I was a one-trick pony heading in and now a swiss army knife thanks to Brian Nolan the head of the course. He only ever encouraged and showed me how to do the various aspects of film and TV.’

‘The ending of it was a crushing blow. That being reality kicks in. But due to Brian and that course, it affords me the opportunities I have today.’

Eoghan was drawn to specialising in lighting which he says helps to shape stories.

‘I have assembled about 25 of my own lights over time. Every set is always different with lighting. I’ve lit period dramas, spaceships, music videos, dramas, thrillers, a lot of short films, sci-fi and fantasy.’

Eoghan’s process for scriptwriting and directing evolves over a long time.

‘I would normally start by writing the idea down in a notebook like a short story,’ he explains. ‘I have found if an idea doesn’t reveal itself straight away that’s not necessarily a bad thing.’

Eoghan likes to ‘marinate’ with his characters and see them slowly play out in his head over time until things click into place and though he struggles with the first draft, he loves the rewrite.

‘9/10 times out of ten you’re interrogating your own script to the 9th degree,’ he muses.

‘I push the script to possibly the brink of overwriting but I prefer scripts that zip along. Dialogue is minimal but means something when said. There’s a rhythm and flow. There’s no ambiguity in the script. A screenplay has to be mechanical in structure. A person can read it fast and understand it. That only comes from many rewrites. The primary lesson I’ve learnt with screenwriting is clarity above all else. When I deliver a script to actors and crew, it’s clear what I’m getting across’.

But what is the process like for directing a film?

For Eoghan’s first short film ‘Damned Peace’ the shots and lights were set up about two weeks before shooting which took a massive stress off their shoulders.

The shot list was also decided well in advance which the cast and crew were aware of too. Between his friend Ian and organisational skills of his Producer/A.D Claire T Cassidy, he tells me what it was a lot less stressful than it could have been and allowed Eoghan to focus on the actors.

‘Creatively, as a director, if you’ve cast well and explained the character to the actor, they have a good idea of what you want’.

‘Then you can give the editor a variety of takes that enables him/her to shape a character arc for that character. You have a lot more to play with then.’

‘You have to be constantly wary of actors’ energy. You could be stuck on a shot and the actor might not quite be landing it but you can’t be hammering the actor take after take looking for a performance. You have to manage to pull the plug on a shot and move on even if the actor disagrees with you. It can be a delicate balancing act.’ – Eoghan Hand

‘It’s great on several levels. One is that it justifies the casting, and two that there is great female acting talent in Kerry. It gives both actresses a boost and the crew. It rewards all their hard work indirectly. On a personal level, it gives you confidence as a director you played a part in that. To give actors a platform to do well and know your writing played a part is an empowering feeling.’

Though Eoghan has written dramatic and thriller scripts he admits that he would love to write comedies.

But one of his favourite things to direct was a music video with a musician called Sorcha Ní Bhriain from Dingle. Though it wasn’t without its challenges.

‘Damned Peace’ was a simple, controlled environment where everything was in one room whereas the music video was outside in Ventry and weather dependent. Not only that but he had to direct two main characters as well as 13 extras around a campfire.

‘It was some adrenaline kick. We had to wait for the magic hour for a campfire scene and not only wait for it but time it perfectly and then shot this long sequence all in the space of an hour as the sunlight is dropping in the background.’

‘If we had screwed it up. It would have been a colossal waste. Instead, we shot a music video in daylight and at night time using flame torches. I think we used a light for two seconds on one shot in the video.

‘Otherwise, it was 99% naturally lit, and we got 15 people dancing in a complicated sequence by a campfire as the sun goes down in the background. It comes across as seamless on screen.’ – Eoghan Hand

Eoghan tells me that the standout moment is Surika herself gliding down from the sand dunes into this campsite and dancers are flowing back and forth around a campfire as she works her way in.

Eoghan admits that getting into the industry is difficult and that it was definitely helpful to have contacts.

‘Starting out, you sign up to short films and work for free because the director or producer will hire on a future project they get funding for,’ he explains.

‘What has happened to me in the past is you work on a short film and the film looks great but the director or producer decides not to release the film. It’s happened on at least four projects. It’s frustrating when you’re trying to show your experience but a future employer looks at gaps and wonders what happened? You should have four extra credits that make you look more experienced are nowhere to be seen.’

‘As a lighting technician, I wouldn’t have a traditional electrician background. It’s already an uphill battle you’re up against unions for work. There’s a glass ceiling in Ireland for lighting work if you’re not from an electrical background or union.’ – Eoghan Hand

Despite this, he says that there is hope. In County Kerry, they brought in a Kerry film bursary for the past three years along with a film officer Siobhan O’ Sullivan.

‘I think she has operated in the role for the last two years and she’s been a great help to me and others. She’d help with information on funding opportunities and she worked to establish the Screen Kerry website.’

In terms of new projects, Eoghan has signed on to help develop projects with a company called Chunky Husky headed by Noel McInerney in Clare and developed another company called IndieSouthwest which highlights film crews behind-the-scenes.

‘An interesting side effect is loads of actors are following the page, hopefully, will lead to more networking opportunities and work for people on the page,’ he says.

‘But a more urgent task is to train and get crews working regularly in the southwest. Because at the present moment it can be incredibly frustrating where a big production could come to the southwest but they bring all the crew down from Dublin when often there are more than capable crew in the southwest.’ – Eoghan Hand

Eoghan is currently editing a feature documentary that he directed called Rough Set Ireland with Francis Cronin and if things line up right. he will also shoot a film on Medicinal cannabis before the end of 2020.

In the end, Eoghan says he likes to create thoughtful films that leave the audience thinking about it afterwards.

‘If people watch a film and have forgotten about it 10 seconds later then I’m annoyed I haven’t engaged them,’ he admits.