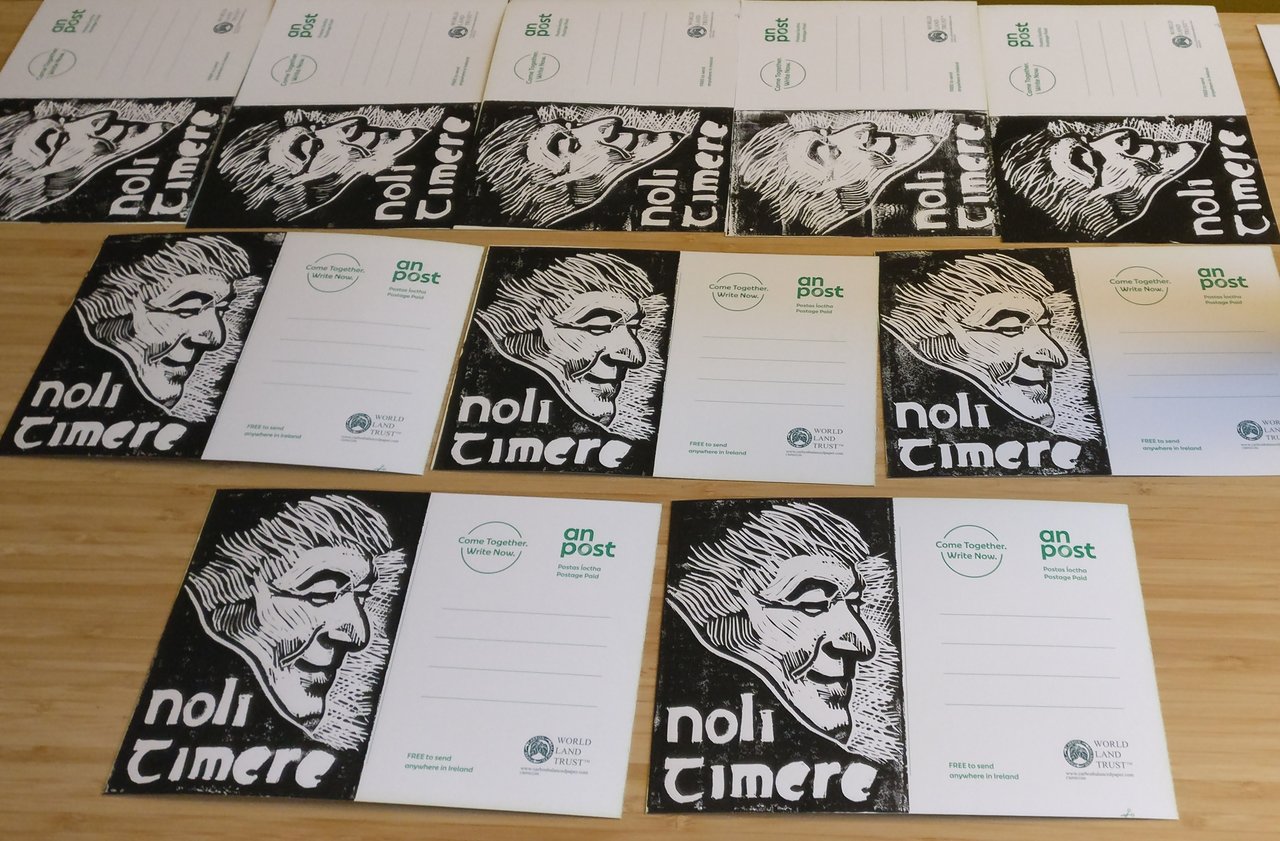 Has quarantine helped you reignite your passions? Despite finding himself unexpectedly stuck in a pandemic, Irishman Brian Ó Muirí managed to rediscover his talent for prints.

Brian has been drawing and doing art-related things for many years and his creativity spilt into his studies at Senior College Ballyfermot where he focussed in on Computer Animation, Graphics and Multimedia Design.

‘Art has been there all through my life for me, everything from epic oil paintings to fiddly cartoon sketches and everything in between,’ he tells me.

‘Last year, I started playing around with basic printing techniques and even created my own Christmas Card using an Irish language pun.’

‘At this time I was simply using mostly words in the prints with very basic images and craft foam with an ink stamp as the medium.’

When COVID-19 kicked in, one day Brian found himself scrolling through Twitter and saw a story about Seamus Heaney and his last words to his wife before he passed away.

He sent her an SMS saying, ‘Noli Timere’ which translates as ‘Do not be afraid’.

‘In the sense of the context of the time, it was quite comforting. I tried to play around with the words on their own a bit, in Latin and even in Irish, but I was never fully happy with the results,’ Brian says.

‘I had some old lino lying around, from years ago, and out of the blue I decided to try do a picture of Seamus to go along with the words. I found a beautiful photo in a New Yorker article which I proceeded to draw onto the lino, in reverse of course.’

‘Very shortly after that, I created a new print featuring none other than Peig Sayers and the reaction was incredible.’

Brian estimates that he’s probably sent out close to 150 postcards so far.

‘I get lovely messages from most recipients telling me how much they enjoy the art and how it has lifted their spirits during the lockdown, This is exactly why I did it. Art has the ability to make you feel better, more at ease or even happy just when you need it.’

‘During this time, I had a lot of people asking if I could produce prints so I looked into what would be involved and took my time making the decision. I had to source good paper and figure out a lot around the costs and logistics of doing something like this as this was never my intention when I started. Eventually, though I launched a Limited Edition print series for both Seamus and Peig. I spend most free evenings hand-printing or packaging prints’.

Brian tells me that the lino cuts themselves don’t take too long to create at about 2-3 hours at most.

‘It is a craft though, and I can feel myself improving with each one,’ he says. ‘One thing, though, is that you never actually know if it’s going to work out, right up until you create the first print. That’s the real exciting part.’