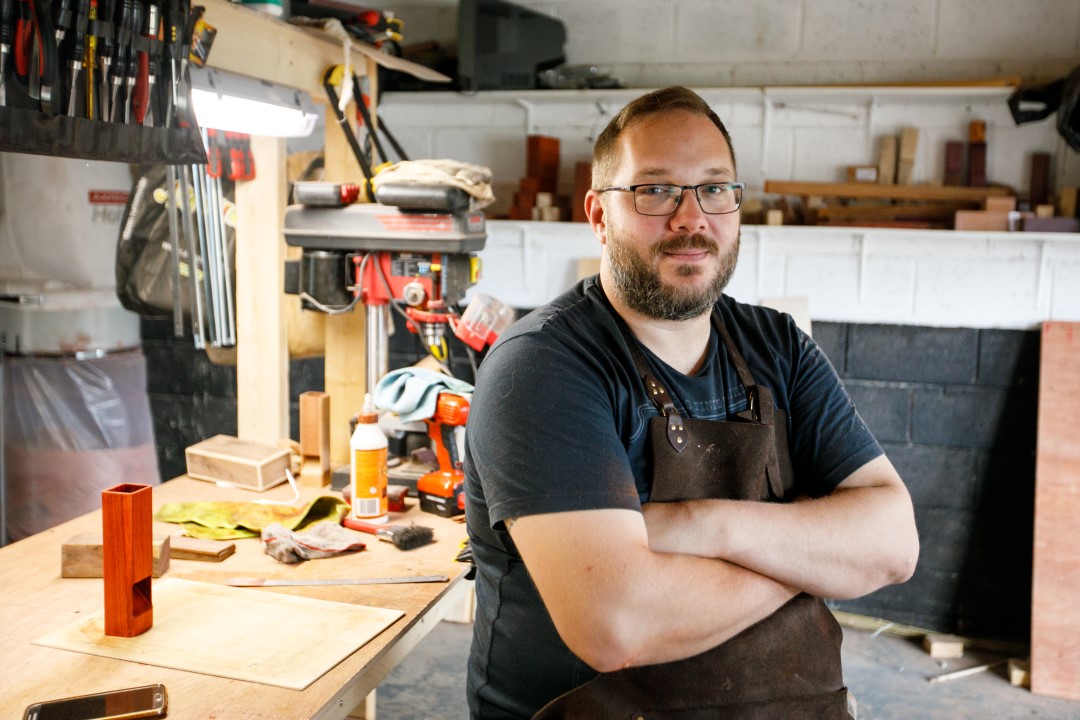 It is not often that you come across an entrepreneur such as Luke McIntosh of Dakota Irish and perhaps a bit selfishly on my part, I knew I had to interview him because of a shared interest: Dungeons and Dragons.

I came across Luke first at a Dublin Comic Con in 2018 where I wandered over to the stall he was at and he showcased his dice trays and dice from Dakota Irish.

This was one of the first experiences I had of Dungeons and Dragons (D&D) and Luke was kind enough to explain the basics to me. It was through him that I bought from him my first set of dice. Since then (and with thanks to Critical Role too), I’ve been hooked.

Luke’s story begins in the US where he tells me he moved around a lot as his father was in the airline industry. At 8 years old they finally settled in Minot, North Dakota and that was that.

“As a kid, I played a lot of American football, baseball, and I wrestled up to middle school,” he tells me.

“I was a precocious, empathetic kid who was easy to friendship due to having moved around a lot but I found deeper relationships a lot harder”.

Due to his rough living circumstances and because of his size, Luke was bullied in school. He became quite introverted and isolated, putting most of his focus on video games, writing stories, reading, and listening to music.

It was not a happy time for him and tells me that he preferred to daydream about living in fantastical worlds instead of facing reality.

“When I was given the opportunity to work as a tech support agent for Gateway computers at 15, I jumped at the chance and the salary,” he says. “Thus began my long and unfulfilling career in IT that ended once I started Dakota Irish!”

Luke tried college at 18 but it wasn’t for him but returned at 21 to study history and English. This he says helped him transition seamlessly into D&D and other role-playing games.

“When working for Gateway, I became friends with a guy who was big into roleplaying games,” he explains.

“Funny enough it wasn’t D&D – at the time D&D was in version 3.5 and widely seen as too complicated to be fun. We played a game called Rolemaster which used a d100 system and to be honest was one of the most flexible and fun systems I’ve ever played.”

Luke also played World of Darkness: Vampire the Masquerade and Werewolf, which he thoroughly enjoyed for it’s dark, gritty aesthetic.

“One of my favourite roleplaying experiences was when we LARPed our first Vampire session.”

It was through this group that Luke started to come out of his shell and learn that it was ok to be different and enjoy things that weren’t mainstream.

“A lesson, I might add, that I wish I’d learned earlier.”

But it wasn’t until Luke moved to Ireland and was here quite a while before he found a group who introduced him to 5e (the system that D&D uses today).

For a long time, Luke was a Dungeon Master (DM) for a homebrew world he created. His creativity to build these worlds shines through and he tells me that the session lasted over a year and was an epic good vs evil fantasy setting.

“I don’t want to give too much away in case we ever revisit the campaign,” he muses. “I loved the story and running the players through it, particularly watching the group find innovative and interesting ways of circumventing challenges. “

“One particularly favourite example is when the group were up against some pretty nasty slaads. They were to fight their way up a pyramid to get a ruby at the top. Instead, they stole a flying carpet they found in a Naga‘s lair and one of the characters used an ever-smoking bottle to hide their movements as they flew up to the top of the pyramid to steal the ruby. The slaads kept failing their perception checks! It was so funny, epic, and generally innovative that I just let it happen.”

“The group were so proud of themselves and the solution.  It was one of my favourite DM moments. But never underestimate an ever-smoking bottle.”

But what makes D&D so special?

Luke reckons it’s because it lets you throw off the mantle of your current self and don the guise of someone else.

“Whatever about challenges, fights, or storylines; it’s all about those characters and players. And for that reason, I adore the changes made to 5e. D&D was suddenly more accessible, more flexible, more fun, less inhibiting, and more inclusive. It’s all of the reasons I love this game and roleplaying in general”.

How did Dakota Irish come to be in Carlow?

When Luke came to Ireland he did end up living in Blessington where he started the company in his home office and garage. But after leaving their rented accommodation, they moved to Carlow which is where his wife’s family is from.

“We decided it was best to be near family and the support that provides,” Luke explains.

“I grew up in my dad’s workshop and learned most of my skills from him, but I also took a lot of shop and woodworking courses when I was younger.”

As the years went by, Luke realised that he had all of these unused skills and an untapped passion for woodworking.

“Once I was made redundant in my last corporate job, I decided enough was enough,” he tells me.

“I’d made wooden trays for my D&D group as a Christmas present and figured, ‘hey, I could do this’, and so I self-funded equipment and some initial stock and had a go at making wooden accessories. I started off on Etsy because it’s a handcraft-focused market and ideal for what I was doing.”

As Luke attended more conventions and got to know more people in the industry, his company became more and more popular and he branched out into dice making.

“I started selling dice as a means of offering a low-cost entry point for gamers who might be looking for new stores to support. It’s hard to justify spending a hundred or more euro on a handcrafted item from a store you’ve never heard of than it is to spend it at a store you love and have bought from before,” he explains.

Luke also felt like he wanted to use social media to connect to his Dakota Irish customer base in a more personal way than other craft and retail shops would have done in the past.

“Eventually, they [his connections] turned into fans and we started more of a community of friends, like-minded gamers than a retail shop and customer relationship.”

When it comes to putting all of the items together, Luke sources all the wood that he uses in the workshop himself.

“I only get the best,” he says. “All of the woods I use are hardwoods and responsibly sourced. Where possible I try to get Irish-specific stuff, like my Spalted Beech, Yew, and upcoming Elm and Pippy Oak lines.

“I love all the wood we use, but if I had to pick a favourite it would be Irish Yew.  The sheer variation in grain, colour, and patterns is just stunning stuff.  And it finishes so smooth.  Honestly, I highly recommend them.  Also, I probably have all of the available yew in Ireland at this point as I keep buying it.  Yew very rarely comes to market because you only get it if one falls down and if you’re lucky enough for someone not to chop it up as firewood.”

According to Luke, his favourite set of dice that he has made haven’t been released yet, so he is rightly tight-lipped but the most popular on the Dakota Irish website is probably the Copper Dragon’s Fire.

The talented craftsman tells me that he would love to get into handcrafted furniture, but says that it’s not viable right now.

“People find it difficult to justify paying for the man-hours that go into it and prefer to buy IKEA or furniture store stuff,” he says. “But I love modular and flexible furniture ideas and have always thought it would be cool to do something that might appeal to gamers.”

The most likely long-term project is to open up his own physical gaming store.

For those new to DND, the biggest advice that Luke gives people is to not let the books or gatekeepers intimidate them.

“The books seem like a lot of information but they’re really more reference materials,” he says.

“You can run your own game with your friends after having read only the first few chapters of the Players Handbook and some of the DM guide. 5e is the most accessible D&D there is and honestly, I have never met one single person who ever regretted getting into roleplaying games. They are some of the best hours you’ll ever spend with your friends and better use of your time. RPGs are for anyone and everyone!”