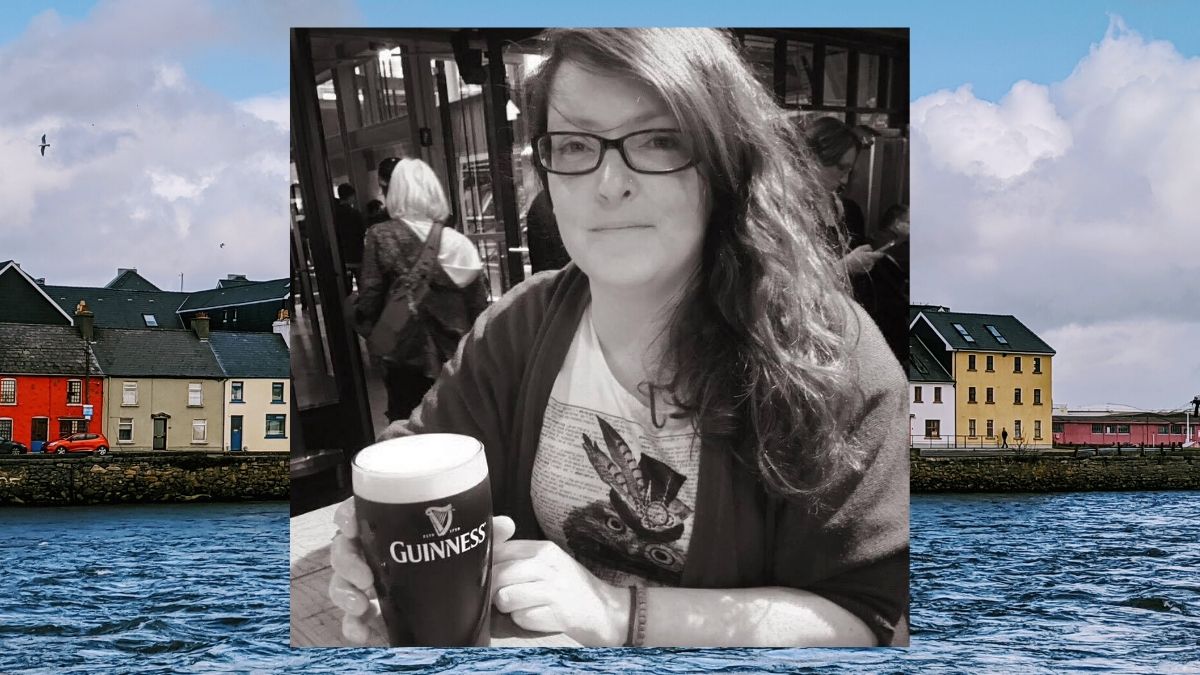 Ireland is a country renowned for its rich culture and heritage, its stories and fascinating history. And, thankfully, there are many people who are working hard to keep our great history alive and well, sharing it with all those who will listen. One such hard worker is Mayowoman Marteen Lane, a tour guide and cultural heritage writer based out of Galway.

Growing up, Marteen had a great interest in not GAA but the performing arts!

‘You probably thought I’d say GAA and Mayo’s continual bid for Sam,’ she says. ‘But no, none of my immediate family have any interest in sport.  Although surprisingly enough I’ve ended up in a relationship with a big GAA head, from Galway!’

‘My mam embarrassingly would remind me that at the age of three or four I would waddle around the supermarket singing Eternal Flame by The Bangles. Now I laugh at the thought of it. I have Sr. Francis, a teacher in my old primary school, to thank for my love of music and singing. She was over the children’s choir for Sunday Mass and the school’s marching band. She literally pushed me into the band!  I played the button accordion in the band and had regular solos in the choir. As a young child, all I wanted to be when I grew up was a singer.’

As a teenager, Marteen jumped at the chance to join the dance, speech and drama classes and seriously considered a career in the performing arts. But instead, she found herself trying many different jobs and courses. Despite performing arts taking a backseat, Marteen continued to sing in choirs.

‘By my mid-20s after studying Animal Care, I was all set to continue on with a BA in Veterinary Nursing in Letterkenny IT, but I didn’t want to be so far away from home,’ she tells me. ‘Athlone IT also had a Veterinary Nurse course, but I didn’t have the marks for it. So, on a whim, I picked a course at GMIT, Castlebar. I couldn’t get a course closer to home if I tried!’

Marteen ended up studying for a BA in Heritage Studies, though surprisingly enough, the thought of becoming a tour guide never entered her head while she was doing her degree.

‘I wasn’t sure what I wanted to do. I just wanted to get a degree, but I also wanted it to be interesting. When I started my degree in 2008 the crash came and there wasn’t much talk of careers.  If there was, it was about making your own work. There were big cuts in the heritage sector.’

Marteen’s course covered many topics. Students learned about everything from history, archaeology and folklore to rural development, natural environment, sustainable tourism and topographical writing. But after her BA, Marteen went back to acting.

‘I put myself through a vigorous routine of auditions around the country and I finally received a place with Bull Alley Theatre Training Company in Dublin,’ she says.

‘It was a tough year but one where I learned so much. On completion, I returned home looking for work. I was toying with the idea of combining my heritage qualification with my acting experience and possibly forming a Theatre in Education Company, that would travel around to local schools and re-enact periods of history in a fun and educational way for the students. That never came to fruition, but it might, down the line.’

Marteen, still on a path to finding what she wanted to do, went to Dublin.

She took a heritage course run by Dublinia which incorporated tour guiding as part of the work experience.

‘The best part was that you would be dressed up as a character from Viking or Medieval Dublin,’ she explains. ‘I couldn’t think of a better way to combine my heritage qualification with my acting experience. It’s thanks to Dublinia and their heritage course that I found my métier.’ And, Marteen has been tour guiding ever since.

But what exactly is cultural heritage? It’s basically what’s passed down to us, our customs and traditions, our history and archaeological artefacts.

‘Cultural heritage can be split into tangible and intangible heritage,’ Marteen explains as she also writes extensively about it.

‘Tangible heritage is the physical aspect of our heritage, the heritage we can physically touch like archaeological artefacts, paintings, sculptures, monuments, and the built environment. Intangible heritage is the non-physical aspect of our heritage like music, dance, oral traditions, folklore, local knowledge, and traditional skills. I believe that when we feel connected to our cultural heritage, it gives us a sense of place and belonging.’

HerGalway Walking Tour tells the stories of remarkable women from all walks of life associated with the harbour city.

The Medieval Galway Tour transports the visitor back to medieval Galway, where they can still see the remnants of that period in history around the city.

And her Galway Dark Tour exposes the visitor to the murky world of murders, executions, deaths and Galway’s dark past.

‘There are many fantastic tour guides based in Galway City who provide a general history of the city, but I wanted to stand out and provide niche walking tours,’ Marteen explains.

‘I first started with the Galway Dark Tour in November 2018. After a few months, I wanted to add another tour. Women’s history has really come to the fore in the last few years and while researching I discovered fascinating women associated with Galway City. No one was sharing their stories and I thought that this would be a brilliant tour to do.’

She chose Galway as a base as it’s a vibrant and lively city with great stories to tell.

‘There’s always something going on between festivals, gigs, and theatre that draws tourists to the city. A highlight for visitors to Galway are the amazing street performers and buskers.  So, tourism is well-established in the city, which is half the battle when starting walking tours anywhere.’

Marteen’s tours last for about an hour and a half and hear about fascinating people who walked the streets of this iconic city and the history associated with key sites.

‘For example, on my HerGalway Walking Tour I stop at a statue on Forster Street called The Final Journey,’ she tells me.

‘The statue is in commemoration of the women of the Magdalene Laundries. At the statue, I talk about Lily McAllister, originally from Co. Cavan, who spent some time at the laundry in the city and managed to escape. I can’t bring groups on that particular tour up to the original site of the laundry as it’s being converted into a women’s refuge centre. I feel it’s so important not to forget the women of the Magdalene Laundries, and to tell their stories.’

Most of the people on Marteen’s walking tours are tourists from the US but she says that she has had some locals as well.

‘One very special person I met in the summer of 2018 was Danny, an Olympic gold medalist in volleyball from the US. All he ever wanted to do was visit Cong and see the locations where The Quiet Man was filmed. He finally fulfilled that dream that summer. He could recite and re-enact the film to a ‘t’.  It was so much fun showing him around the locations!’

‘Many locals have said that they never thought of taking a walking tour of their home city. It’s funny how we rarely visit attractions or do activities that are on our own doorstep,’ she notes.

Of all the people Marteen has learned about she says that Dr James Barry is probably the most fascinating.

‘Dr James Barry was born Margaret Bulkley and disguised themselves as a man to become a pioneering surgeon and carried out the first successful caesarean section where both mother and baby survived,’ Marteen explains.

‘They came from a respectable family in Cork, however during their teens Margaret’s father Jeremiah lost all his money. Margaret and their mother fled to London, leaving Jeremiah languishing in a debtors’ prison, and sought help from their uncle James Barry, a well-known artist.’

After James died, his friend General Fancisco de Miranda, an exiled Venezuelan revolutionary, took Margaret under his wing.  Miranda encouraged Margaret to study medicine. In the early 1800s they disguised themselves as a man, adopted the name of their late uncle, and set off for Edinburgh University and with hard work ‘James Barry’ succeeded with his studies and returned to London a qualified doctor.

James ended up fooling the army, high society, and the whole British Empire but the secret didn’t last forever. In 1865 James passed away in London leaving instructions to be buried in the clothes he died in, without examination however this was either forgotten or ignored. His secret was revealed by a charwoman who was hired to lay out the body.

‘I think it’s important to keep these stories alive because we can learn something from history in general,’ Marteen says.

‘In terms of women’s history, some of their stories were forgotten and when they’ve made a significant contribution, that can’t and shouldn’t be ignored. I hope that by keeping the stories of women’s history alive young girls are inspired by the amazing women who’ve gone before them.’

Marteen will be heading back to university later this year to gain a Master’s and to add yet another string to her bow.

Though there’s further study on the horizon for Marteen, she wants to focus on building on her walking tours and once she’s happy with them she hopes to expand to chauffeur-driven tours visiting churches along the west coast with Harry Clarke windows.

‘I’m looking forward to starting my MA in Irish Studies (Literature and History) with NUIG in September. There’s always something to learn being a tour guide; it never stops!’