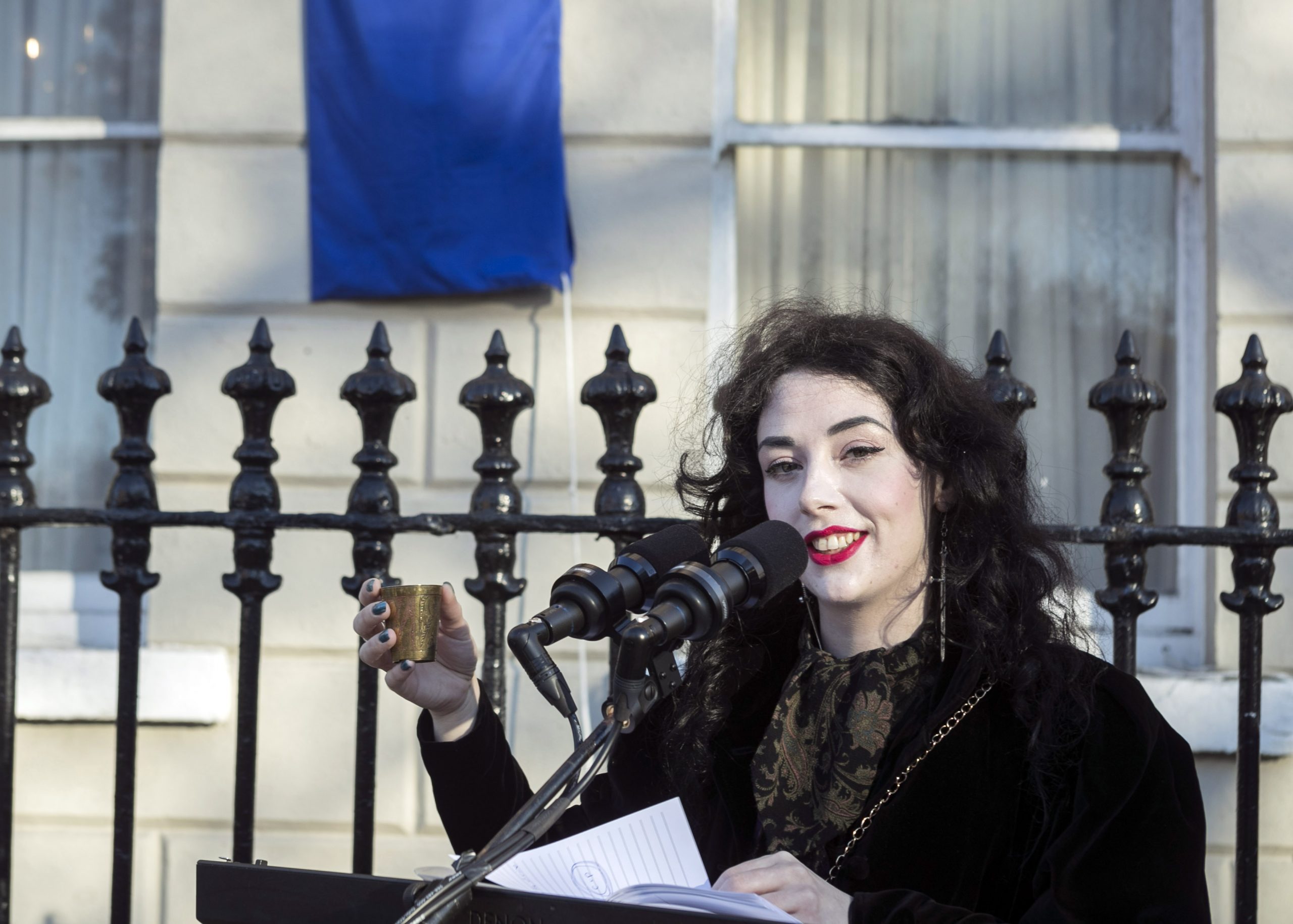 The plaque was unveiled by Lord Mayor Alison Gilliland at Wilde’s former residence in Merrion Square, now owned by the American College Dublin.

Living at 1 Merrion Square, Dublin, Lady Jane Wilde’s weekly literary salons put her at the centre of Dublin’s cultural life. She continued her salons in London, where she lived following the death of her husband, Sir William Wilde, in 1876.

Born in 1821, Jane Wilde was a keen linguist who translated works from German and French. Inspired by Thomas Davis, she became a nationalist, and from 1846 contributed to the Nation, writing under the pen name Speranza.

Among her poems in the Nation was ‘The Famine Year’, her response to the Great Famine, in which she criticised her own Anglo-Irish landlord class.

In 1848, her piece ‘Jacta Alea Est’ (‘The Die is Cast’), was seen by the authorities as so inflammatory that it led to the suppression of the Nation.

Jane Wilde was not only a poet and a nationalist: she was also a feminist, an articulate advocate of women’s rights, who identified education, and access to education, as being key to the advancement of women.

Noting that the house is now the home of a college, the Lord Mayor said, “Many of the students in the building behind us are following courses in creative writing, and I can’t help but think that Jane Wilde would be delighted that her drawing room is once again a hive of culture and creativity.”

Proposed by the American College Dublin, the plaque joins existing ones which commemorate her husband, Sir William Wilde, and her son, Oscar.

Also at the unveiling was the President of the American College Dublin, Dr Joseph Rooney, who flew over from Delaware for the event.

The plaque honouring Lady Jane Wilde Speranza is long overdue and we are proud that it will be displayed in such a prestigious manner at One Merrion Square. Jane was a hero to the Irish people during the 1840s and an important part of the Young Ireland movement. With her salons and other gatherings, Speranza created an open house within these walls for more than two decades and American College Dublin intends to continue this tradition.

Echoing the Lord Mayor, Dr Rooney concluded, “I think Jane would be delighted that the house is now a place of learning, and it is particularly poignant that it is possible to study creative writing and performing arts here in Speranza’s old home.”

The decision to erect the plaque was made by the Dublin City Council Commemorations & Naming Committee, whose chair, Councillor Michael Mac Donncha, said,

“The Commemorative Plaques scheme allows the City to formally commemorate people who have made a significant contribution to the life of Dublin. This is only the sixth of our commemorative plaques to honour a woman, and we hope to see many more such applications in the future.”

Dublin City Council’s Commemorative Plaques scheme is intended to facilitate the formal commemoration of people, organisations, and events that have made a unique and significant contribution to the life or history of Dublin through outstanding achievement, distinctive service or significant community contribution.