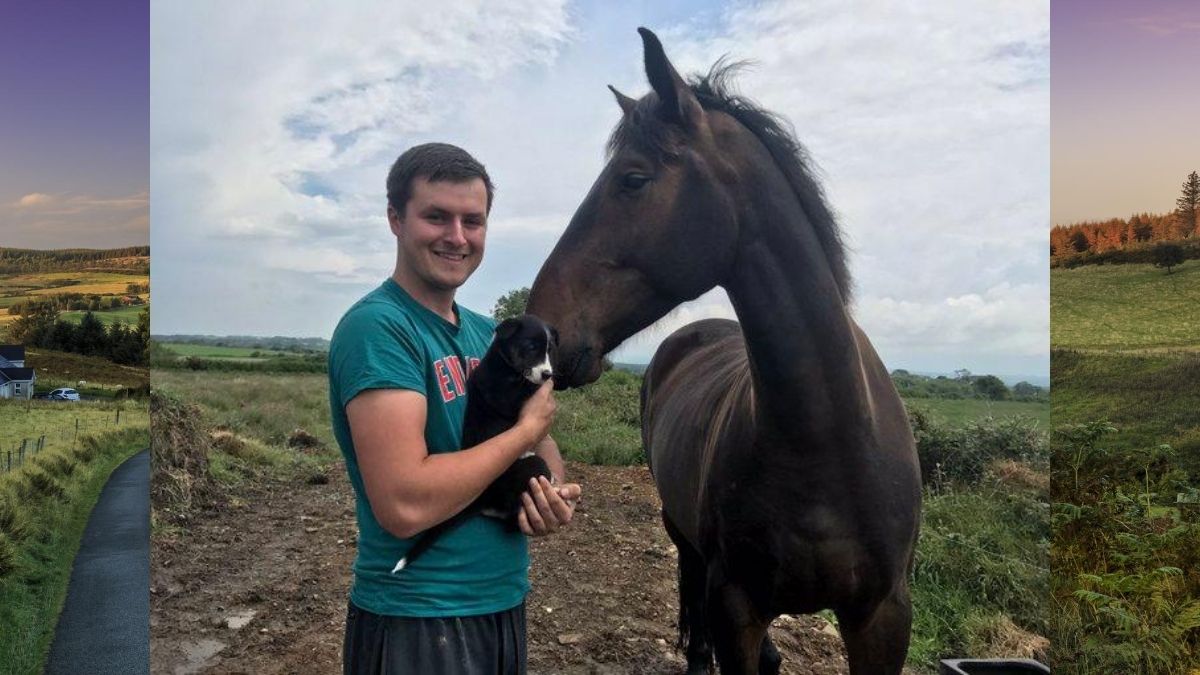 The world of TikTok is still quite a new one to many but one man who’s having a lot of fun educating people on the world of Irish farming and dog training is the KerryCowboy from Kerry.

‘Both my parents are from rural farming backgrounds and my grandparents played a major role in my rearing’ he tells me.

‘I’ve always been interested in animals and some people think I have a bit of a skill for communicating with them, especially dogs and horses. I’m studying Irish, business and education in Mary Immaculate College, Thurles campus and am working with Kerry Agribusiness for the summer. Outside of all of that I just love farming.’

But does this Kerryman prefer country life or the city life?

‘Through college I’ve had experience of living in a more urbanised setting but it’s only concreted what I always knew, I was born in the habitat that I was meant for!’ the KerryCowboy muses.

‘You can not beat the fresh air, mountain views, the sea, the community and just a more natural way of life. Although I would like to explore the world a bit before I settle down, I am well aware that I am exactly where I belong! I’m fortunate at such a young age to have found that.’

This now famous TikToker is also a fluent Irish speaker and gained his love for the language at a young age.

‘Sí an Ghaelainn an teanga is ansa liom gan dabht’, he says. ‘I was lucky enough to have a good foundation in the Irish language, my mother came from Valentia Island and I was lucky enough as a young fella to be able to converse with several people who were probably the last of the speakers on the island. I had fantastic teachers throughout my school years and even have worked in Corca Dhuibhne as a Ceannaire.’

The Irish language is one of Séaghan’s greatest passions and he says that he has a massive grá for it.

So how did they get onto TikTok?

The Kerrycowboy (his TikTok name) tells me that it has been a bit of a rollercoaster.

‘I used to make snapchat videos for my friends that were at times humorous and my sister said I should upload them to TikTok and they all got 20 or 30 views, as expected!’ he explains.

‘But then I posted a video of this pup I’m training in, Braindí, and it blew up overnight. Literally I went to sleep and it like 30 views and the next time I looked at TikTok was about 12 the next day and it had been seen by over 50,000 people. It’s now almost at a million views and I can’t keep up with people’s questions.’

Though they have received a few negative comments, he says that the vast majority of people are positive and that’s what counts to him.

‘Braindí was a pup off of a friend of mine’s cowdog and although I had planned on getting a boy and naming it Bran (after Fionn Mac Cumhail’s hound) it didn’t take me long, even at such a young age, to see this dog is something special. She just looked me in the eyes in a way I’ve never seen an animal do before. It’s like she has wisdom beyond my comprehension, that sounds crazy to a lot of people I’m sure!’

In a matter of weeks, their TikTok has gained much traction and he now has nearly 131,000 followers who check in with his daily adventures on the farm.

When he’s is not away at college he helps out on the farm, hence the majority of his TikTok content is based on it. He brings in the cows for milking, sets up pastures for them and for when they have sheep and he plays a major role of running back and forth trying to get them into a pen in Kerry!

‘There are no set hours on a farm and there’s always more to be done. There can be serious pressure on my parents especially in springtime when cows are calving so it’s great to be able to do a bit during the holidays and at the weekends.’

Ireland only makes up less than a fifth of his following on TikTok, third place after the United States and Canada and only barely ahead of Australia and the UK.

‘I suppose farming and the country lifestyle is universal and you have such large populations in those countries. A lot of people comment that they love the animals and my accent, but some enjoy the scenery and just the simplicity of the videos. I’m not the most technologically literate so you’ll see very few effects in my videos, mainly just raw insights into the rural lifestyle and some really bad jokes.’

The KerryCowboy’s plan for TikTok was always promoting and sustaining the Irish language and farming from Kerry but this newfound popularity could, of course, open other doors for him.

‘I’ve had a lot of people asking for help training their dogs and although she’s so young and I wouldn’t dream of it for another few years at least there are people lining up for a pup off Braindí, her talent is rare and exceptional really,’ he says.

‘My future in social media is even more difficult to plan than my ‘real-life’ because these platforms are changing and evolving so rapidly, we don’t know what’s around the corner but I’m sure in whatever way the wheel turns that you haven’t seen the last of me!’