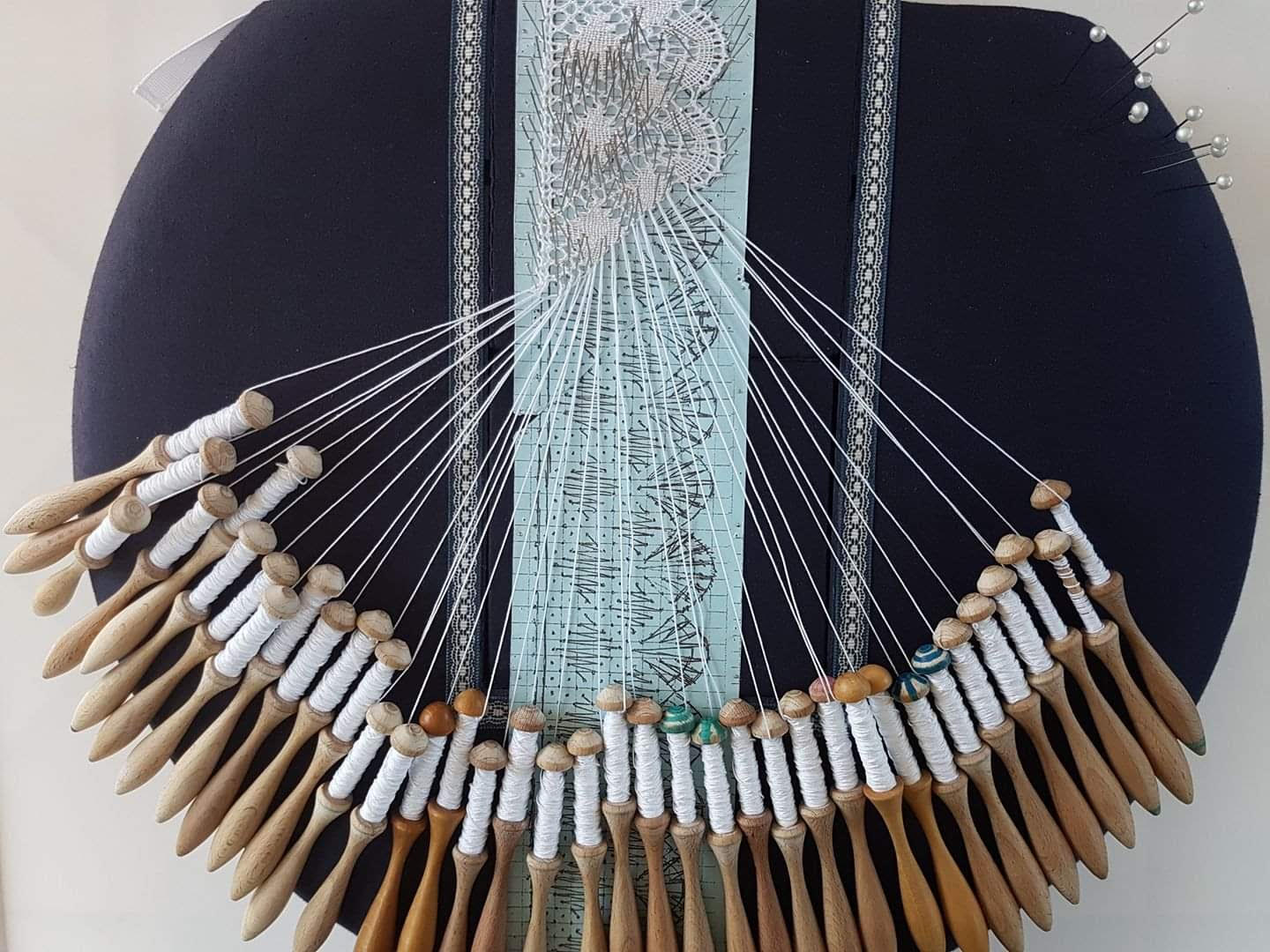 It was announced this August that eight key practices of Ireland’s living cultural heritage had been inscribed on the National Inventory for Intangible Cultural Heritage; One of the practices was the inclusion of Headford Lacemaking.

Headford is a small rural town in County Galway alive with vibrant community groups, artists, musicians, and environmentalists all working together to make it a great place to live and work.

One of these groups is the Headford Lace Project (HLP), an eight-person voluntary committee established in 2016 to research, revive and reimagine the craft of Headford Lacemaking through workshops, demonstrations, community collaborations, and events that inspire.

The project began when a visual artist Selma Makela included Headford Lace in a bird box installation as part of the Nesting Lark festival held in Headford in 2016. This led to the discovery of the only piece of Headford Lace in existence, kindly loaned to the project by a local woman who knew it had come from Headford Castle in around 1904.

Headford Lace is a style of torchon bobbin lace, where threads attached to weighted bobbins are crossed and twisted over each other on a lace pillow either on a table or held in the lap. Historical evidence shows that the lacemaking industry in the town dates back to around 1766, making Headford Lace one of the oldest Irish laces.

The earliest contemporary record of lacemaking in Headford was written by Colonel Richard St. George Mansergh St. George and dates to 1790, in ‘An account of Galway’ he remarked: “The women of Headford make lace.”

The Headford lacemaking industry was one run by women.

The women of the wealthy Anglo-Irish St. George family who lived in Headford Castle patronised the industry for generations, while poorer Headford women, particularly widows and single women of the town, created this fine delicate lace by hand in order to make a few extra pennies.

Census records demonstrate that many of the lacemakers lived on New Street and their cottages still survive today.

Headford Lace was largely absent from historical texts about lacemaking in Ireland, despite it being well-known at the time. For example, in 1887 a piece of Headford lace made by a Mrs. Burke was exhibited in the Women’s Industries section of the Royal Jubilee Exhibition, Manchester.

In the clothing account book of Lady Augusta Caroline Dillon née Crofton, wife of the 4th Baron Clonbrock, dating to 1870, there is a record of a purchase of “8 yds Headford Lace” for which she paid two shillings.

It was recently discovered that Headford Lace was purchased by not one, but two Queens. Stepney St. George, the local landlord during the Famine, wrote a letter to the Queen Dowager Adelaide pleading the case of Headford’s lacemakers who were suffering the terrible effects of a dysentery epidemic.

Stepney received a reply from the Queen’s Lord Chamberlain and a remittance of 20 pounds with an order for Headford Lace to that value. Queen Victoria followed suit about two weeks later and placed the same order.

Building on this wealth of historical evidence, HLP has worked hard over the last five years to revive the skill of Headford Lacemaking through quarterly classes with our bobbin lace tutor, Jackie Magnin.

So far over 80 apprentices have been trained in the craft of Headford Lacemaking and we look forward to welcoming more learners and improvers back to Headford soon.

As well as preserving the tradition, we have also reimagined the craft of Headford Lacemaking and explored it through a variety of collaborations and events.

In October 2020, we held an international lace exhibition in the shop windows of Headford town, displaying the work of 34 artists from 11 countries, with each piece containing an element of handmade lace.

In collaboration with Kilkee Forge in Co. Clare, we commissioned two lace-inspired benches for the town to give people a place to sit and chat. We have also worked on musical collaborations, such as Bobbin Beats with Drumadore and Claran Theatre, a theatrical drumming piece inspired by the rhythms of lacemaking.

The establishment and maintenance of this National Inventory are one of Ireland’s obligations under the 2003 Convention UNESCO Convention for the Safeguarding of the Intangible Cultural Heritage.

It protects, promotes, and celebrates Irish living cultural heritage practices, customs, crafts, and traditions. There are now a total of 38 practices on the list, all of which were included following rigorous assessment by an expert advisory committee. Receiving this State recognition is a huge honour.

We one day hope for an all-island lace trail, which would allow visitors to travel the country and learn all about the different lace traditions and history.

It is important to us that all of those women lacemakers, many of whom are still unnamed, are remembered for their intricate skilled work and that the tradition is passed to future generations.