How growing up during the Troubles influenced this Irishman’s paintings 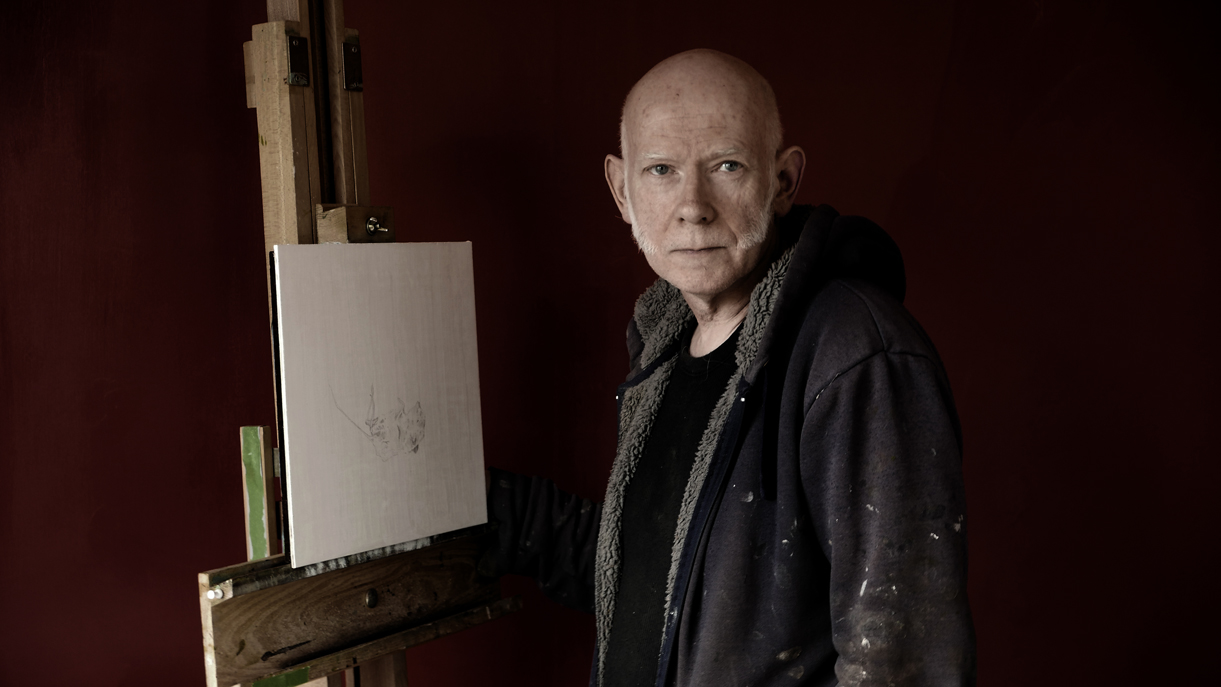 When artist Greag Mac a’ tSaoir was growing up in Newry in the 1970s, it was a very oppressive society. Soldiers and the Royal Ulster Constabulary (RUC) were everywhere, and people were being shot while bombs were going off. At the time Greag was simply used to it – he was a small child when it all kicked off and knew nothing else.

But for all that he remembered, he was very much affected by the killing of 12-year-old Kevin Heatley, who was shot dead by a British soldier in Newry and 12-year-old Majella O’Hare who was on her way to church when she was shot twice in the back.

‘So, our childhoods were bathed in low-level anxiety,’ Greag tells me. ‘Constantly being stopped and questioned at gunpoint by squaddies not much older than ourselves was an insidious affront to our dignity and that was its intent. That has carried over in a very fundamental way into the art I make.’

The talented artist was an only child who would grab a hold of anything that he could draw on and read.

‘At school I lived for the very rare days when the cakes of paint were brought out,’ he reminisces.

‘My parents bought me a set of encyclopaedias and there was a pretty extensive article on art with colour illustrations and I must have nearly stripped the ink off the page looking at them.’

While at school, Greag focused on A-Level Art History and started coming across artists like Joseph Beuys and Richard Long whose work had resonances with environmental issues.

‘Beuys was also a great showman which I think appeals to an Irish sensibility and the fact that he had come to Belfast and made work about Ireland was very affirming,’ Greag explains.

‘I was also enthralled by Northern renaissance painters like Durer, Bosch and Breughel. You’re a sponge, in the best way, in your teens before you learn to deride things to fit in.’

Though Greag didn’t get into art college, he went on and trained as a screen printer and then later did a degree in Art History. He worked in a few galleries and freelanced by setting up exhibitions as well as helping artists with the administrative side of things though he found it to be a real drain of his creative energy.

‘I was painting through this whole time and exhibiting wherever the chance presented itself but money was hard to come by and I had a new family to look after so I took a full time job with an unhealthy commute and the paintings dried up,’ he says.

‘After a couple of decades of artistic stagnation, I met a wonderful Scottish woman and moved there to be with her. It was a fresh start and I took it as a sign that I should get back to painting. If you are creative there’s a compulsion to be using whatever skills, you have. It really isn’t good for you to try and bury it.’

Greag tells me that while some of his art directly deals with what happened during The Troubles he also creates work that deals with the impact humans are having on the environment and most recently in paintings of birds and animals that have been directly hurt by people.

He learns by degrees and refines his ideas as he goes along.

‘I’m envious of those artists who have immediate clarity!’ he says. ‘At the moment I’m painting a lot of dead animals and birds – rabbits that have been hit by cars, birds taken down by house cats, hedgehogs that have drowned in the flash floods. I draw first and then move onto painting.’

To execute this, Greag used a painting technique that involved building up layers of thin paint with glazes and oil layers on a wooden panel coated in gesso – which primes the surface for painting and ready to accept paint.

‘It’s a very slow process, methodical and exact,’ he says.

‘The paint layers have to almost completely dry before you start to work over them. It’s a process a painter from the 16th century would recognise. I’m not naturally methodical or exact though so I tend to keep a second painting on the go that I can take my excess energy out on. They tend to end up on the fire but occasionally one will make it through!’

Greag’s work with ‘fragile creatives’ blends elements of life with the environment and it was a series that began while he was living in South Armagh.

‘You would see dead foxes and badgers on the road all the time,’ he explains. ‘People drive around in a trance and they don’t make allowances for all the other creatures that we co-exist with. Badgers in particular will take the same route their ancestors did. They can’t adapt and we won’t.’

When Greag started making works about the impact we have on the landscape he was still coming across these animals and trying to save any he could, they eventually became the focus of his work.

‘In a certain light it could seem grim but I’m trying to afford them some dignity, to make them the focus of our attention. I’m using the kind of techniques we usually reserve for portraits of dignitaries to depict broken animals. I see it as an attempt at evening up, at redressing the wrongs we do to them.’

Greag tells me that he finds that ‘painting is the easy bit though’ and that it is the promotional aspect the one he finds most difficult.

‘Open submission exhibitions are very expensive, and I think it’s important for painters at least to get the physical work seen,’ he says.

‘Social media has meant that there are other ways of getting to an audience but I’m not a natural self-publicist. I think a lot of creative people are natural introverts who have come up with a more extrovert persona that they can use to face the world. I can also suffer from crippling imposter syndrome when faced with other people’s work online. I have a website but it’s hard to balance the time you need to maintain that with keeping up a social media presence and actually making work.’

Because Greag tended to live away from the centre of things, he says that he never slotted into an established art scene in Ireland.

‘I have other artist friends that I talk to but it’s loose, not at all what you think of when you think of Warhol’s Factory or the way the abstract expressionists went drinking with each other,’ he muses telling me that Ireland has always produced amazing artists.

‘It’s a small enough place that you tend to know at least some of them. Like anywhere it’s much easier to make an impact working at the hub of things.’

Greag, now based in Scotland, says that there’s a pull between Glasgow which has a very conceptual art scene and Edinburgh ‘which is highbrow in a subtly different way, maybe a little more accepting of traditional art forms, not as sniffy about painters’.

‘The two cities are only 50 miles apart though so there’s a whole nation full of artists who are very removed from the centre of things.’

Though the artist mostly works solo, he would love to collaborate with down the line.

‘There’s a Fife-based landscape painter over here called Dominique Cameron who I’m online friendly with and we’ve talked about doing something at the overlap of our interests and of course if I could coax Will Smith out of the lamp I would ask for a collaboration with Siobhan McDonald, an artist from Monaghan who makes the most amazing work around climate change and the threat we pose to the world!’