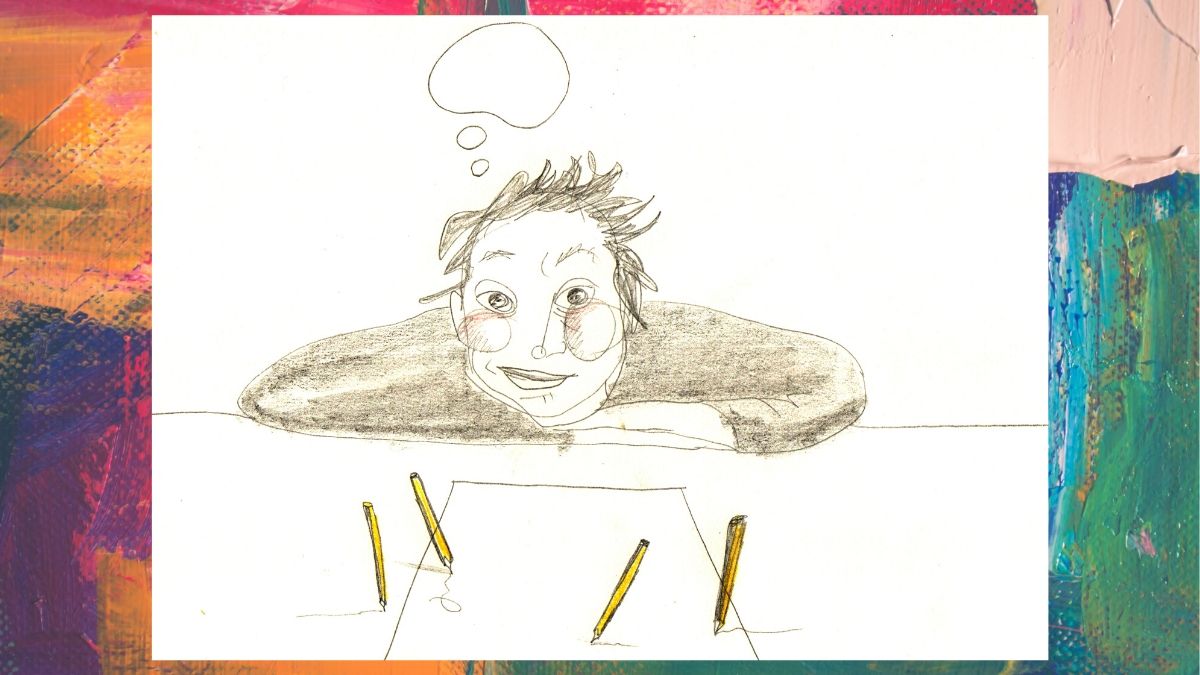 Meet Elida Maiques, an artist and creative who lives in Wicklow. For many, the concept of Irishness, identity and acceptance can be a long journey full of questions. But for Elida, she is clear in confirming that she is a proud Irish mammy.

Elida was born in València, Spain, to a Guatemalan woman and a Valencian man in 1970s.

‘Mislata was still a village, slowly being swallowed by cars and concrete,’ she tells me.

‘Every day we would walk to the bakery, in the old Arab quarter, and watch señor Antonio and señor José bring hundreds of bread in and out of the flames in their ancient dome-shaped oven. On the side, señor Antonio would roast a handful of peanuts for us, a treat. Señor José was stern, but he loved us all the same, and we loved him back, especially honoured to say hello to him on the street in later decades, to have shared that magical space.’

Elida would spend her summers by the beach in València or take the journey to Guatemala to see her grandparents. She says that those summers and visits cut the cloth of who she is today.

Sadly, Elida’s father never came to Ireland before he died though she says that he would have loved it here. Her mam came twice to meet her Irish grandson and Elida tells me that she could not get over the vitality of nature in Ireland.

‘She is amazing. Something that I noticed growing up is that her strategy in Spain was integration. Her Guatemalan accent was very faint, her vocabulary mostly adapted, with spectacular transgressions,’ Elida tells me.

‘This made me question my own integrations strategies for some time. Nowadays I don’t think about that much, but about what my contribution to Ireland is. In the end, I want to have the behaviour I want to see, so saying ‘hello’ on the street, is a good start. Planting wildflowers, berries, and trees with my neighbours in another step.’

Elida’s mother also had plenty to tell me about her impressions of Ireland:

‘The Irish are eager to help the foreigner, give directions, offer suggestions and, in general, make them feel welcome in their land. The pride and joy they take in their city and institutions are heart-warming.’

‘Just an example: I was carrying my grandson, then about 2 months old, when visiting the National Gallery. The baby began to cry, and I turned to leave. One of the museum attendants stopped me and said, ‘Please don’t leave. You will miss the final paintings in the exhibition. The baby will settle down in a few minutes and you will be able to finish your visit.’ The baby did settle down into a nap and I did see the entire exhibition.’

‘What stayed with me, and still does, was the sensible and sensitive man who kindly urged me to complete the visit. He was so proud of the museum, of “his” museum, that he went out of his way to share it with me, to give me the chance to know and admire it too.’

‘Living in Ireland; having an Irish family, has given her [Elida] strength and depth as a person. Ireland has given her space and opportunity to develop her different talents. She has been able to work with artists and writers; found recognition for her own work, to the extent of being considered an Irish artist.’

Elida describes herself as having a compact family, with her 8-year old, partner and their cat. Both Spanish and English are spoken at home and she is trying to learn Irish.

‘We are surrounded by our fantastic nieces and nephews and a big group of loving Irish people, my Irish family. As with many families, their roots sink deep into Ireland, but my extended family is also connected to Australia, Spain, Sweden, Brazil’, she explains.

‘The first year I was going out with my partner, we went camping in Connemara. At the cemetery in Ballyconneely I understood I could live and die in Ireland. My bones would be happy here. I have spent 16 years becoming Irish, ah shure, we shall see what I am in another 16 years.’

Elida tells me that ‘Becoming Irish’ is a rather complex process.

‘For some people, it is not enough to be born and bred here. For others, it is a lot easier,’ she says. ‘Is it possible to be a ‘Fartherner’ and an Irish mammy at the same time? Guatemalan, Valencian, Irish. All of them are true in me.’

‘When people ask me where I am from, these days I tell them my mother is from Guatemala, my father is from Spain, and I am an Irish mammy, as my son is Irish. So, I say, you tell me where I am from. I am not going to choose. People laugh a gentle laugh. But I reply with a mirror question, I ask them where they are from, and when you let people speak, there is always a grandfather with French roots, or an uncle who is Spanish, or a brother who lives in Australia. That monolithic invention, being Irish is a solid myth.’

‘I’ve done my fair share of self-stereotyping, it’s an old game. Today, we could refuse to simplify ourselves. We are complex human beings, we could honour that and have complex, nuanced relationships.’

There are many things that Elida loves about Ireland including the weather but another thing that stands out to her is how volunteering is so central to life in the country.

‘If something is close to your heart, you just volunteer for it,’ she says. ‘GAA, music, creative writing, youth clubs the extent to which volunteering is part of Irish culture is impressive. It is proof of a very active civil society. Sure, this has a very dark side too: in many cases, all these associations we volunteer for are an attempt to fill in enormous gaps in care, an attempt to make up for long-term neglectful governance.’

‘I love the sound of the Irish language, and its old alphabets, I love winter swimmers and their raucous laughs; I love the way Irish cultures reveal themselves slowly, layer after layer, as with nature, the more you are part of it, the more you notice all the forms of life in it.’

Elida works as a visual artist with a strong line in comics and she honestly believes that everyone is an artist.

‘We have allowed ourselves to be convinced that it is [art] only valid if it follows the codes, is professionally packaged and is sold. I see young and old having a strong metaphysical experience as they pick up a pencil and draw. ‘

‘That experience belongs to everybody, and I want to see everybody’s drawings. Last time I heard “I cannot draw” was in a bank office, this bank manager guy accepted to play a drawing game with me. His resulting drawing is amazing, I still have it, I stuck it to the business card he gave me.’

When Elida arrived in Ireland in 2003, she walked into SubCity, the comic shop, and was thrilled to find a comic by Phil Barrett.

‘It felt like European underground, the comic scene I was used to, in València. At Independents’ Day, a punk rock self-publishing music and zines fair, I met Paddy Lynch. They both lured me to the Dublin Comic Jam, which felt like home: drawing together, sharing pencils, spectacular pens and projects. Later I met Emma Rowe and we co-edited a book I still like, Gods & Monsters of Tomorrow.’

Elida is a member of the Irish comics collective Stray Lines with Phil, Paddy, and a gang of fantastic artists.

Aside from that, one of her projects is her larger than life ‘I AM A FOREST’ which came to her while walking in Bray Head.

‘I came back with three acorns in my pocket. On a whim, I just put them in pots. That winter I felt like a mad woman creeping out of bed before sunrise to water those pots,’ she tells me.

‘There was nothing stirring there. Nothing. Just a madwoman watering dead soil in pots. Then, for weeks, it felt like something was moving, the soil looked different, or did it? Finally, I saw a green tongue wanting to stick out of the pot. Oaks grow quickly, so that spring I saw those unmistakable undulated oak leaves.’

Fascinated with how nature just wanted to grow Elida began reading a lot about trees including a few classics like Niall Mac Coitir’s ‘Irish Trees. Myths, Legends and Folklore‘ and ‘The Secret Life of Trees’ by Peter Wohlleben.

From her extensive reading and research, she came to fall in love with the arbutus unedo (strawberry tree), hawthorn, Scots pine silver beech and willow.

‘I bought a couple of heritage apple trees from Irish Seed Savers, who do amazing work. I gave them to a friend, but I took a couple of cuttings last Autumn (2019), which are showing a couple of tiny leaves now,’ she says.

‘It is truly incredible how you can cut a twig from a tree and it will just grow. Nature is bountiful, and this is very obvious in Ireland. It has this reputation that nothing grows here. Of course, bananas do not grow here, but an array of other fruit and vegetables. Ireland is a temperate rainforest land, that is a very rare ecosystem. We have cold-water coral, legless lizards, carnivore plants, orchids, whales and freshwater pearl mussels.’

‘Yet we need to give it space. Shush the strimmers, lawnmowers, supertrawlers, say goodbye to the assorted poisons (herbicides, plaguicides). They poison us too. We just need to let those rainforests grow. This is when I AM A FOREST formed.’

The community aspect of it was developed thanks to the openness of St Fergal’s School in Bray.

After speaking with the home-school liaison officer, Mairéad, it was quickly organised that Elida would gather the seeds and prepare a little instruction sheet while the school would organise envelopes, printing. A group of volunteers all dedicated mammies came together to prepare 400 envelopes containing three seeds and instructions.

The hardy group have since distributed 1,200 seeds and are on the lookout for places to plant out the trees.

‘We have already planted out a few dozens in private land offered by different people who want to have native trees in it. If you want a young tree, we have oaks, hawthorn, willow, ash, sweet chestnut; we will just give them to you. Just drop us a line.’

The art side of this art/forestry/community project includes a series of tiny wildflowers ink drawings to scrolls of paper mixing human figures and the wildlife creatures.

But how can we inspire others to look after our planet and indeed to foster the nature we have here on our doorstep? Elida says that we need to encourage people to grow.

‘Friends are delighted to come and tell me that the wildflower seeds I gave them are actually growing, buttons opening into a cornflower! Community gardens are fantastic. I believe we have to go the way of nature: bountiful, perseverant.’