Meet the Irishwoman writing one Wikipedia article a day for 2020 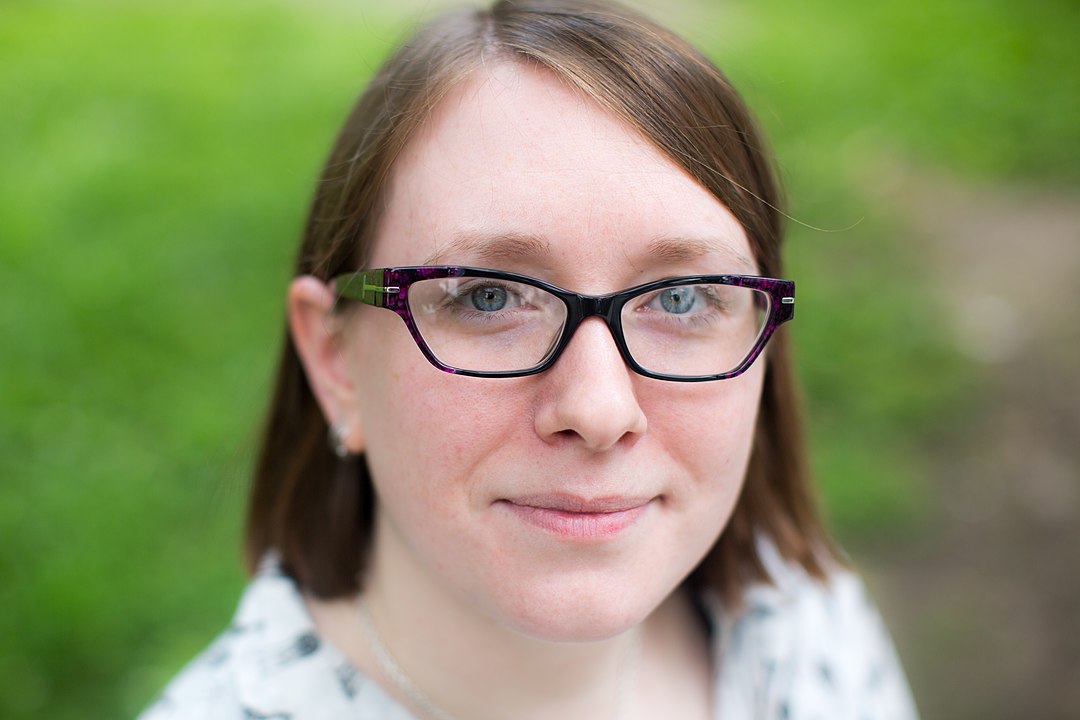 If you’ve ever had to work online or have been curious about anything to do with anything, then chances are at some stage you’ve used Wikipedia. But have you ever wondered about the people who are behind some of your favourite articles and why they do it? Meet Dr. Rebecca O’Neill, the Project Coordinator for Wikimedia.ie.

But let’s backtrack a bit. Carlow native Rebecca was brought up in a creative family and is the youngest of four.

‘It is safe to say that I have been all around the houses with interests and work! I’m from Carlow, which my father’s family are from going back to when Adam was a boy, but my mum is from Limerick. Both of my parents have wide interests, and both broadly have an interest in history – but very different aspects of it,’ she tells me.

Rebecca’s dad was interested in local history and she would sometimes spend her Sundays with him looking after the Carlow Museum (before the county council took it over). Her mother, on the other hand, was very artistic and crafty.

‘Looking back, overall, my family is an inquisitive bunch, I always remember no matter who I asked the answer was to go and look it up in the World Book. I think staying curious has been the overarching theme of my life so far.’

Rebecca’s creative side kickstarted her education and ‘as an arty kid’ she ended up doing a degree in graphic design (Visual Communications) in DIT. But she quickly discovered this was not for her.

‘Safe to say I pretty much hated it and never worked at it. The pace of work in graphic design was my idea of hell!’ she says.

Instead, Rebecca changed tactics and started volunteering in the National History Museum in her final year where she catalogued a mollusc collection; she wrote her thesis on graphic design in museums. And as luck would have it, they were looking for documentation assistants for the museum in 2008 and Rebecca was snapped up for the position.

She spent five years working for them and it was there that she met the late Irish scientist and educator Mary Mulvihill. It was through her that Rebecca became interested in the history of women in STEM (science, technology, engineering and mathematics).

Though she had mountains of experience now under her belt, Rebecca decided to pursue a Masters in a form of museum studies part-time called Interpretation, Representation and Heritage with the University of Leicester.

And, she didn’t stop there!

‘Once I had done the Masters, I was convinced that I wanted to do a PhD, eventually leaving the museum to start one with the University of Hull’ she tells me. Notably ambitious, Rebecca now has a PhD in Digital Media.

‘My Master thesis was on the idea of institutional memory – particularly in museums – which is the intangible and often un-recorded knowledge that people build up while working in an institution or organisation.’

‘From that, I developed an interest in what it meant to be a curator, as I felt that a lot of what they did was build up a huge amount very intimate knowledge of a collection. My PhD, in the end, investigated how curation has changed, and how if applied to platforms like Wikipedia, we can see people’s work there as citizen curation (like citizen science, citizen journalism). I drew a line from collecting hobbies and being involved in societies like historical ones, and the kind of niche activities people do on Wikipedia, Open StreetMap etc.’

Rebecca is currently the Secretary on the Executive Committee with Women in Stem and Technology (WITS) and sits on the National Committee for Commemorative Plaques for Science and Technology.

The Wikimedia Community Ireland was officially founded in 2014 and Rebecca has been involved with it since its inception.

‘Basically, it means we have the seal of approval to represent the Wikimedia Foundation, the charity behind Wikipedia, here in Ireland’ she tells me. ‘We run events, partner with groups, and generally advocate for people based in Ireland to contribute to Wikipedia and the other Wikimedia projects like Wikimedia Commons and Wikidata.’

Rebecca works with lecturers and teachers to get groups of students to improve Wikipedia articles rather than writing essays.

Wikimedia also runs photo competitions like Wiki Loves Monuments, which encourages people to take photos of National Monuments and other protected structures and upload them to Wikimedia Commons under an open licence. This means that all those photos are now free to use for all sorts of purposes!

‘Getting students, or those who work with cultural institutions to edit Wikipedia means we can get them to use paywalled or harder to access resources to improve articles relating to Ireland, which means that everyone accessing it across the world benefits!’

Not only that but Rebecca tells me that more and more they focusing less on English language Wikipedia and more on the Irish language version, Vicipéid.

In 2020, Rebecca posed herself a challenge: she was going to write one Wikipedia article a day for the entire year. The reason was simple. English language Wikipedia has a serious gender gap, with just 18% of biographies being about women.

‘I have done two rounds of a writing challenge called 100 wikidays, where you write a Wikipedia article every day for 100 days. I was the first person to do it in English’ she tells me.

‘Many of the participants have gone on to set bigger and bigger targets for themselves and given that I had an ever-increasing list of articles waiting to be written, I thought I’d just bite the bullet and write them up! Many of them come from places with the Dictionary of Irish Biography. Given that there are Irish men waiting for articles too, I decided that for every 19 articles I write about women, I would write one about a man.’

For those wondering, Wiki Women in Red is so-called because on Wikipedia if the article doesn’t exist as a link, it will appear in red instead of blue. Many years ago, individual editors started compiling lists of these links, and given that women are less likely to be written about than men, the term ‘Women in Red’ was coined.

For this curator, the process of writing an article can have many steps to it. Rebecca mostly writes biographies, usually historical ones and usually about Irish people who’ve had an impact in Ireland. The first step is to do a bit of research to see if there’s actually enough material to draw on to be able to write an article in the first place.

‘In recent years I work from reliable sources, like the Dictionary of Irish Biography or the Oxford Dictionary of National Biography and see who is missing on Wikipedia’ Rebecca says.

‘I do this, as if they are included there, they have been selected as notable already, and those biographies tend to be factually quite solid. Sometimes I will just happen on someone or something on Twitter, Facebook or elsewhere, and if I find it interesting, I’ll check if it is covered on Wikipedia.’

‘A recent one of those was a post I say from the Carlow Museum about the only Carlow person believed to have been in the GPO during the Easter Rising, Bridget Connolly. At times, with some historical figures, there is a lot that is unknown or is speculation. I will often strip out a lot of that, as Wikipedia is just about facts. However, if there is a theory about someone that a number of noted historians have written about, I will add it with the caveat that it is a theory or interpretation, especially if there isn’t consensus, I will add if there are those that disagree or off counter theories.’

Despite being heavily involved in the Wikimedia community, Rebecca stresses that it’s important to use Wikipedia wisely.

‘To be honest, even the most veteran Wikipedian will tell you not to use it as a source for anything. Even the best written Wikipedia article is just an introduction or an overview of a topic,’ she says. ‘Using Wikipedia as a source is just as academically lazy as starting an essay with “The Oxford English Dictionary defines ______ as…”’

One of Rebecca’s passions is teaching people how to use Wikipedia properly and how to assess articles which she describes as a ‘basic critical digital skill’. She also believes that we should place more trust in Wikipedia as a whole.

‘What I have found on the increase is even very expert professionals using the Wikipedia definition like the first few lines of an article to explain their field of expertise in a presentation. It is so distilled and worked on that it is the most succinct way of articulating it.’

‘Distrust of Wikipedia is still rampant in universities and schools, telling students NEVER to use it, which is misguided. Wikipedia is 19 years old now, it probably isn’t going anywhere, so we just need to teach people how to use it well – as let’s face it, it will 9 times out of 10 be the first thing that Google will show you regardless.’

The most satisfying person that Rebecca has written up on Wikipedia is Irish zoologist Jane Stephens who was an expert in sponges from the early 20th century. She first came across her work while working in the Natural History Museum and was stunned by how little was written about her.

‘It worked out that a wonderful scientist, John Lucey, was also fascinated by her work on Irish sponges and wrote up a really comprehensive biography of her!’ she enthuses.

‘This meant I had enough references to finally write about her! She was a proper hidden history as she outlived most of the people she worked with, which meant when she passed away there was no one to write up her obituary in the way she had done for those she’d worked with. It felt amazing to add her to Wikipedia with her contemporaries, where she belonged.’

You can read about more fascinating Irish people in technology on WeAreIrish here.