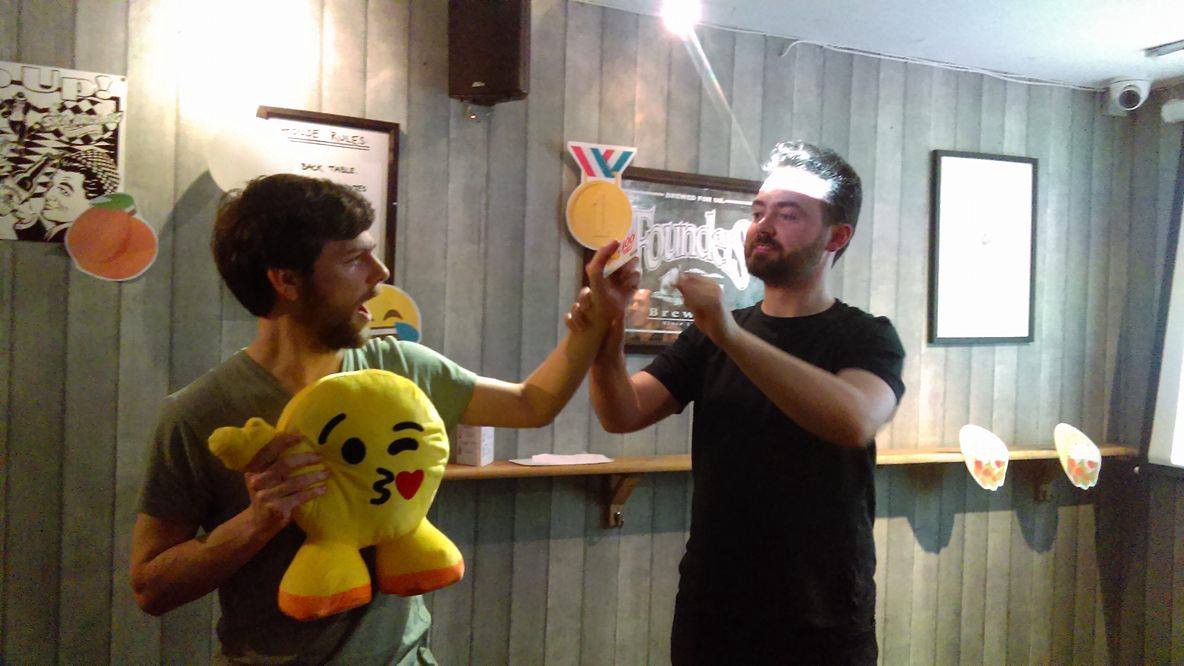 Emoticons have come a long way since the characters appeared back in 1999. If you’re a smartphone user, then the chances are that you’ve used emojis and emoticons in some form over the years, but did you know that there’s such a job as an Emoji Officer?

Irishman Keith Broni is one such man to carry this title, and he spoke to me about how he came to work in the world of emojis 😊.

Keith grew up in Swords, in North County Dublin where his family still live to this day. ‘I’d a very pleasant childhood, despite being a little on the shy and pudgy side for the majority of it,’ he tells me.

‘Thankfully the shyness dissolved early into my time in Malahide Community School, where I made friends which whom I’m still very close to’.

Keith’s interests growing up were what he calls very ‘otaku’ in nature (otaku a word used for those who are somewhat obsessed with Japanese geek culture).

Keith went on to study at University College London, eventually getting a Master of Science in Business Psychology, something which led to his interest in emojis and also helps with his current work.

‘It was during my MSc that I became interested in emojis academically and this led me to design an emoji-based consumer perception experiment for my dissertation,’ Keith says. (Titled ‘()()()?: An assessment of Emoji as a source of Emotional Contagion manifesting in Emotional Brand Attachment and Brand Personality Appeal’).

‘The MSc gave me a grounding in consumer behaviour in both traditional and digital contexts, and of course emojis are an increasingly prominent aspect of both digital marketing and consumer discourse,’ he says.

Following his curious nature, it’s no wonder that Keith did come to work in the into the emoji realm and is now Emojipedia’s Deputy Emoji Officer. He oversees changes to emoji sets from major vendors, as well as translating and interpreting emoji uses and trends.

‘This particular emoji-based role is relatively new,’ Keith tells me. ‘The CEO (that’s Chief Emoji Officer!) of Emojipedia.org, Jeremy Burge, offered me this role in late January of this year, having assisted him as the site’s Senior Emoji Reviewer for the past two years.’

Keith assists in the running of the site and its social media presence, as well as writing up changelogs for new emoji designs and analysing trends in emoji usage via social media data. The two prevalent trends that come to mind, he says, are the convergence of emoji designs across vendors, as well as year-on-year increases in usage documented across various platforms (messenger apps, social media sites, and push notifications, for example). Keith also holds an emoji-based consultancy position with Guildhawk (formerly Today Translations).

A lot of what Keith does in his line of work is looking at slogans to see what would work best in each context. This sounds perhaps like an easy task, but it isn’t. Country, culture and language are really important factors on making decisions and it can take a lot of analysing to choose the right emoji to suit the tone of the message.

Things like what are the most used emojis in a country and why are they used provide vital data to the emoji officers and translators.

But why are emojis so valuable in the way that we communicate these days and what makes them so attractive to use?

In short, Keith says, that emojis ‘allow us to place proxies of paralinguistic cues into written digital ‘speech’. What I mean by that is the allow us to channel gesture, facial expression and vocal tone when communicating in digital messages, ideally in a manner which provides additional clarity to the recipient of the message you have just sent.’

Though that being said, like any other language things can get lost in translation, especially amongst people of different generations. For example, research has shown that 7% of the peach emoji is used to reference an actual peach, whereas the other 93% referenced the posterior (the poor aubergine has faced a rather similar fate).

Keith compares emoji use to a form of slang and notes that what might ok to write in emojis in Ireland, might mean something completely different in emoji speak in Asia.

It’s clear that our love of emojis has impacted the way we share ideas and emotions across the world, but this love has also gone beyond the screen. How so? Well, Keith was also the organiser of Europe’s first Emoji Spelling Bee where a group of battled it out to decipher creative prompts in English.

Competitors had to ‘spell’ out the phrase using emojis in a fixed amount of time but unlike professional spelling bees, where there are right answers, emoji spelling bee judging is subjective in nature, often based on parsimony, whimsy and accuracy!

‘I was granted permission to emulate the concept after emailing Jenny 8. Lee (founder of EmojiNation and executive producer of emoji documentary Picture Character), and then hosted the event in The Black Sheep in Capel Street,’ Keith says.

During the contest, the prompts were circulated by emailing each participant with a link to a Google Form through which the participants submitted their spellings within a strict(ish) timeframe of 3 minutes.

Below is one of the best answers to one of the prompts their participants were presented with.

You can read more about the experience and its logistics here.

Keith’s favourite emoji is the 🙌 (Raising Hands). ‘I just love its relatively widespread connotation of jubilance and celebration,’ he explains. ‘Generally speaking, I use the positive facial emojis most, like the majority of users!’

When it comes to the differences between emojis used in Ireland and somewhere like the UK, Keith says that we share many of the same emoji habits. ‘I’d be very confident there are less Côte d’Ivoire emojis posted from Irish Twitter users on St. Patrick’s Day though!’ Keith muses.

‘My classic example of emoji misunderstanding is a design-based issue which was resolved in 2018, but still amuses many. On Samsung devices for many years, the Eye Rolling emoji 🙄 looked very interested and expectant as opposed to irked and dismissive – a pretty seismic semantic difference’.

So, what lies in store for the future of the emoji world? Keith stresses that emojis are not a threat to language usage but rather a compliment to it in digital spaces and are more comparable to gesture and other paralinguistic cues than to words.

‘Ultimately digital writing isn’t prose – it’s written ‘speech’ lacking in narration, had for many years required additional semantic markers to assist with clarity, like we used to see with emoticons and kaomoji,’ he says.

‘Emoji fill that semantic space, though of course, they bring their own attributes and quirks. As for what lies in store, I firmed believe that while we continue to communicate via text-based messaging platforms, we will be using emojis prominently.

‘In the short term, however, there’ll be a delay to 2021’s batch of new emoji designs due to COVID-19, so we’ll just have to make due to 2020’s impending batch for a little longer than usual!’